Many of the world’s greatest logos have been in use for decades or, in some cases, even centuries.

For these special logos, what is it about these graphics that has made them so resilient, even as their brands struggled?

It’s not just branding specialists who have to work with logos: branding and logo design touch every design discipline, including digital product design. Our mentors at Designlab work with students to help them develop visual and UX design skills, including how to develop successful logos for apps and websites.

In this piece, we’re sharing our take on what we believe are the essential ingredients of a successful logo. Take these and let them be your logo design inspiration.

What makes a good logo?

The world’s best logos seem to have these three elements in common:

The most revered logos are, almost without exception, graphically simple. This doesn’t mean they’re simple to create. Reducing an idea down to an elemental symbol is often the toughest part of the logo design process.

The most graphically complex logo in the list below is Coca-Cola’s, but this is counterbalanced by its conceptual simplicity: just the brand name set in script writing.

The most revered logos are, almost without exception, graphically simple.

Many wonderful logos have no graphic ingredients other than lettering. In this list alone, Coca-Cola, FedEx, and Lego have built a classic logo just using text. Other fantastic examples include Sony, 3M, IBM, and countless others.

A logo’s memorability is often directly related to its simplicity.

We were able to identify the one visual concept that made that symbol memorable for all of the logo inspiration on this list—whether it was a swoosh, an arrow, or a mermaid.

Many logos, even those of big and successful companies, fail to be memorable because they can’t easily be associated with a single idea.

A common misconception with logo design is that the symbol needs to literally represent the brand; however, some kind of disconnect is often helpful and stimulating.

The most literal take on this on our list is Apple’s—but here, the brand name itself has a helpful disconnection from what the company actually does. As for the mermaid, the golden arches, and the swoosh, their strength is that they’re highly visually memorable, not that they literally represent what the brand offers.

Time is the toughest test of all. Great logos are capable of weathering economic storms and providing a focus of identity, authority, and stability during turbulent times.

All of the logos in this list have performed for decades. Observing the above points—simplicity, memorability, abstraction—is often a recipe for something timeless.

Great logos are capable of weathering economic storms and providing a focus of identity, authority, and stability during turbulent times.

We’ve seen time and time again that brands who allow themselves to be led by trends reduce trust and find themselves visually diluted. The classic example is Microsoft (sorry, Bill), who have burned through no fewer than five major logo rebuilds since 1980.

We’ve put together a list of ten logos that exemplify these values and put the rest of the world to shame. 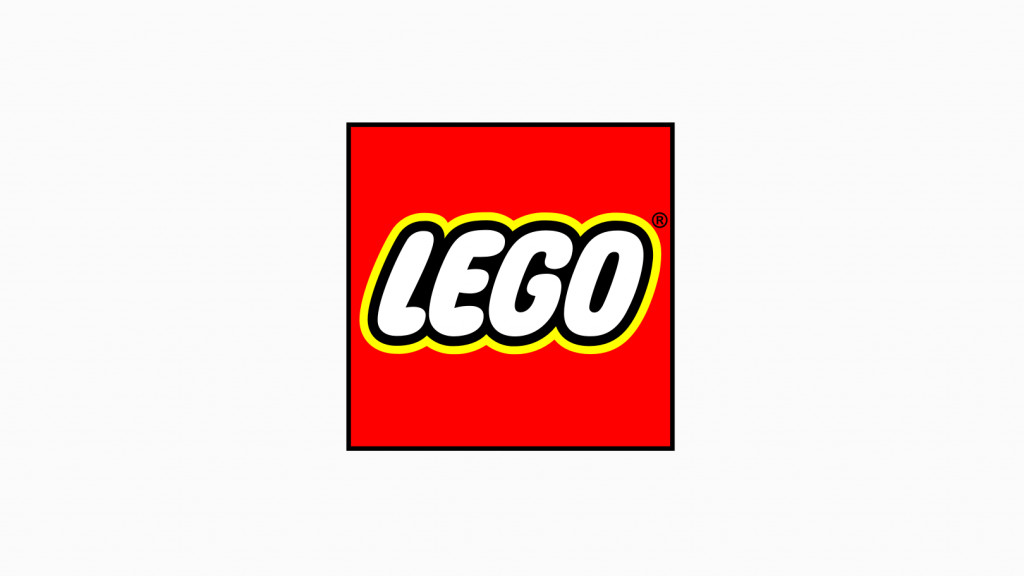 Every kid’s favorite toy at some point in their childhood, Lego is about creativity, freedom, and play. The brand’s bright logo connects effortlessly with all these messages.

The first version of the bubble writing

It went through many iterations, particularly in the company’s early years. The bubble writing was first used around 1954, and the current version has been in use since 1973 (other than a minor modernization in 1998). 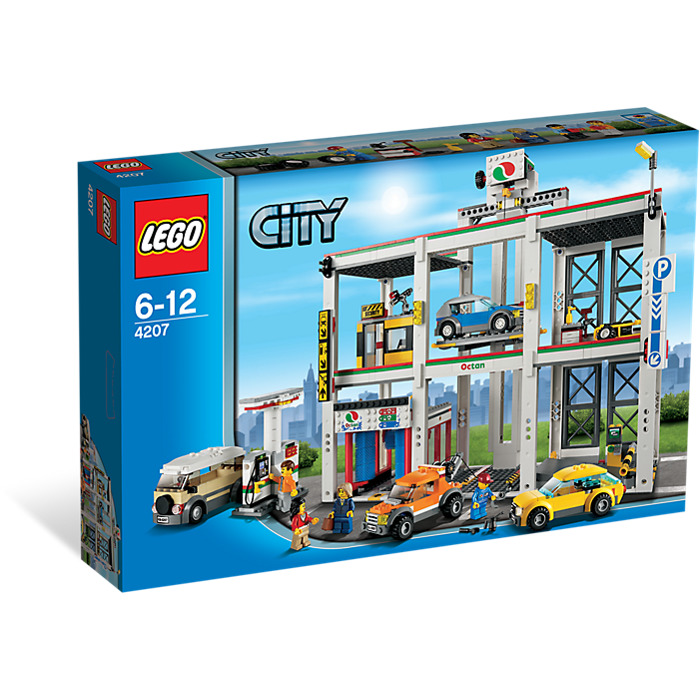 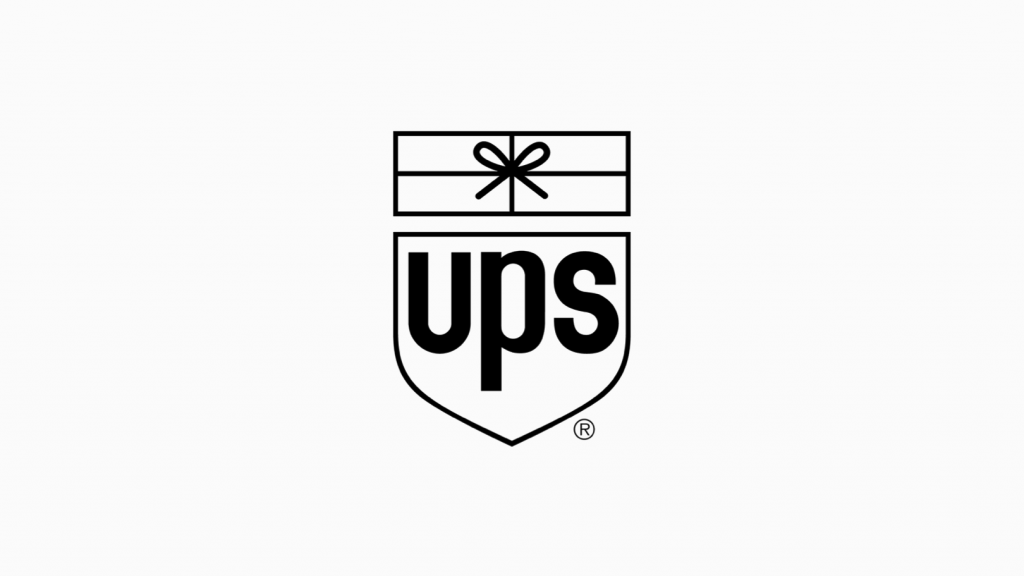 Paul Rand was one of the 20th century’s greatest graphic designers behind many celebrated logo designs, including ABC, IBM, and Westinghouse. His design for UPS incorporated the “shield” shape from the company’s previous logo, dramatically simplified it, and added a delightful and distinctive bow at the top.

Regrettably (IMO), UPS returned to a shield-only version of the design in 2003. 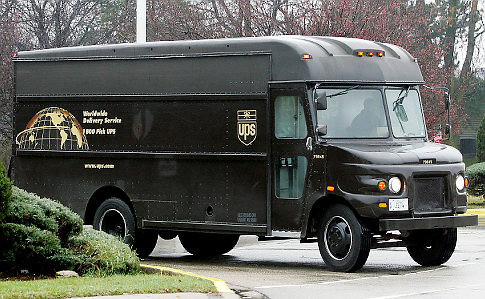 Rand’s version alongside the 2003 update

Designed: 1947 (in combination with Ferrari lettering)

Legend has it that the Ferrari logo started life, not on a car, but on a WWI fighter plane. Celebrated Italian pilot Francesco Baracca died in combat in 1918. After this, his mother apparently asked Enzo Ferrari to put the graphic that had appeared on Baracca’s plane, and use it on his cars.

After spending some time on Alfa Romeos with which Enzo Ferrari was involved in the 20s and 30s, the prancing horse finally first appeared on a Ferrari in 1947. Ultimately, though, the logo is successful not because of its story, but because it is simple, memorable, and connects with ideas of speed and power—perfect for a sports car.

If you’re not aware of the arrow in FedEx’s logo, then prepare yourself—there’s no going back from this one. Designer Lindon Leader created the FedEx logo back in 1994. At first glance, it’s a wordmark set in bold Futura, the iconic geometric typeface designed by Paul Renner in 1927. 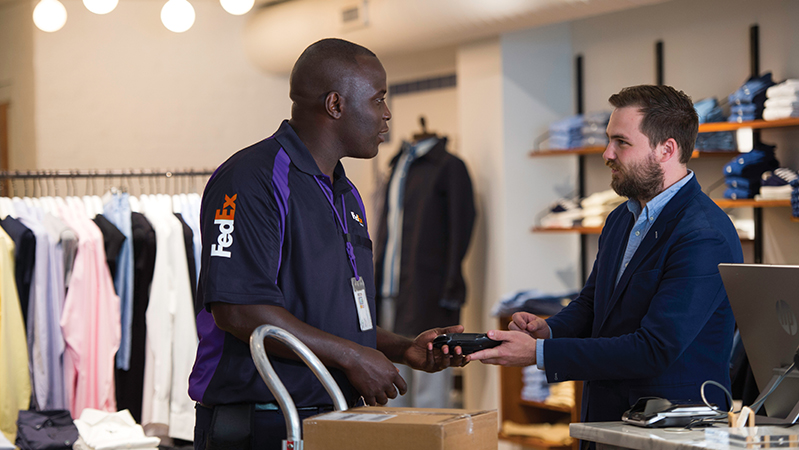 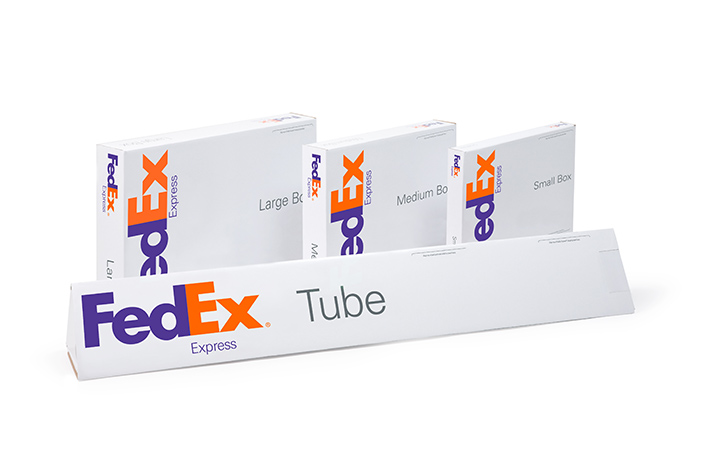 The logo in use.

But for this logo, the type is specially modified so that the negative space between the “e” and the “x” forms a lovely white arrow. Just like the silences in music are as important as the notes, the white space in graphic design is as functional as the positive elements. 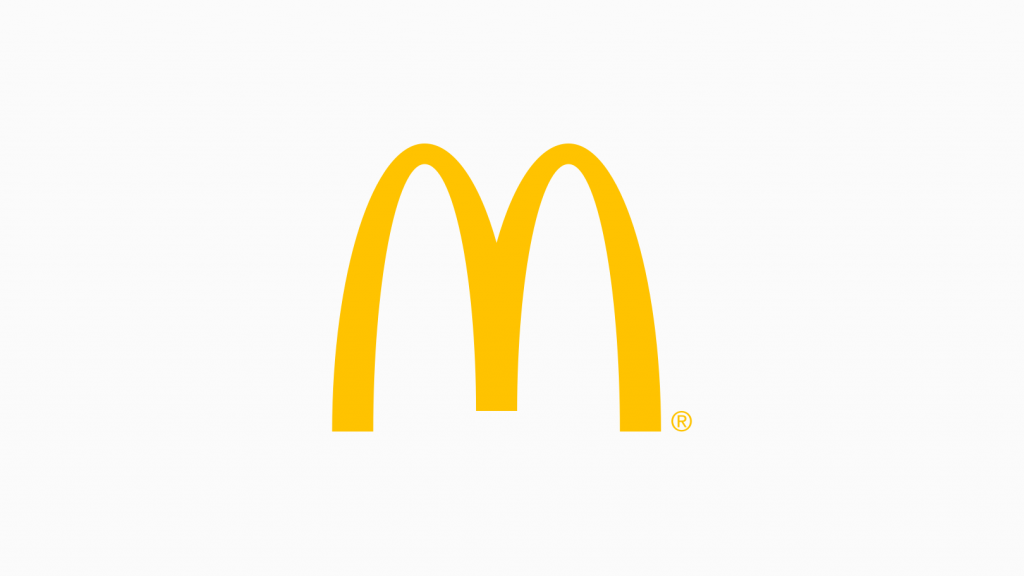 Designer: Stanley Clark Meston and others

Conceptualized by (non-designer) brothers Richard and Maurice McDonald in 1952, the Golden Arches motif was developed by various hands over the following two decades. The current version has been in use for over fifty years! 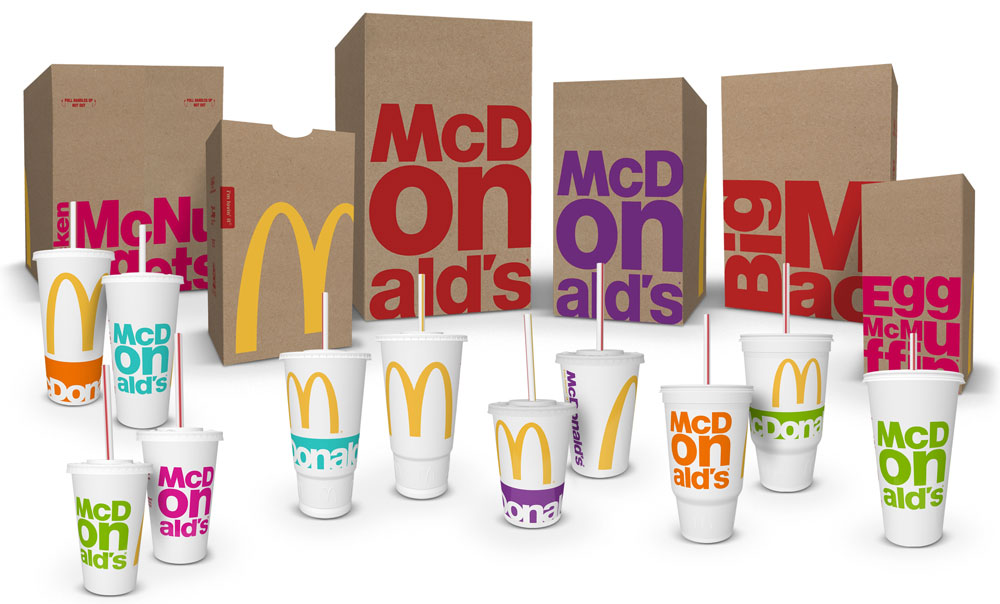 Like many great logos, its level of recognition is supported by wider branding, including the company’s distinctive red and yellow color palette. This can be seen in the success of a recent ad campaign, which used closely cropped parts of the logo, the two brand colors, and little else. 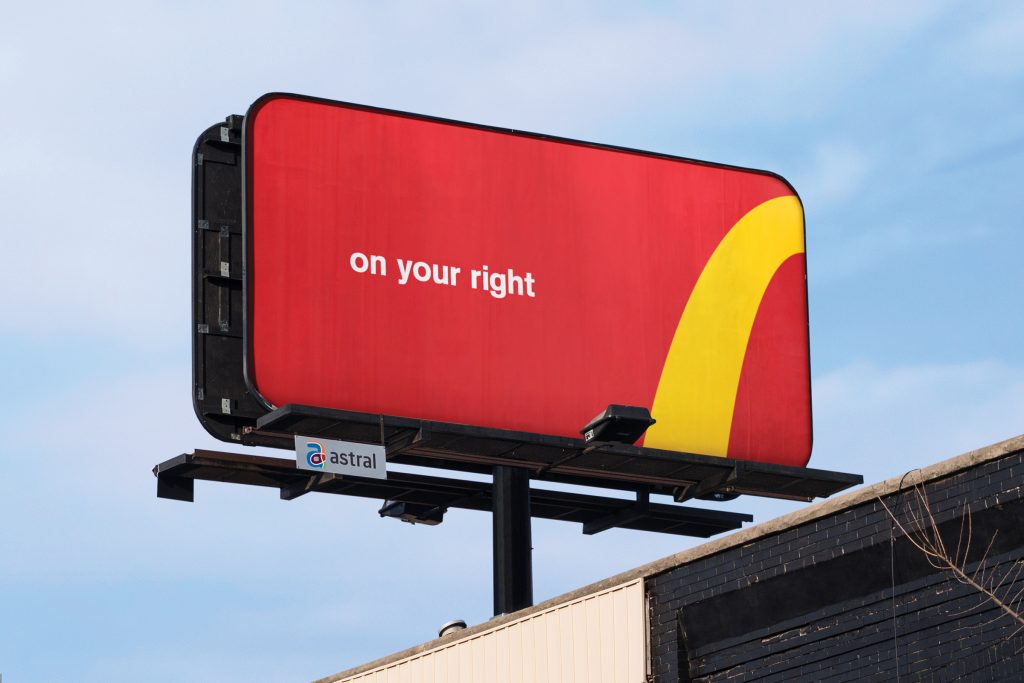 Coca-Cola has one of the oldest logos still in use, and, as with McDonald’s and a surprising number of other great logos, it wasn’t designed by a “designer”. Frank Mason Robinson was in fact the bookkeeper for John Stith Pemberton, the drink’s inventor. 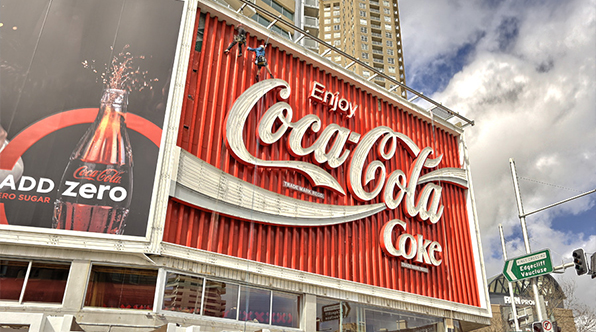 The logo was based on Spencerian script that was common in the USA at the time. By sticking with their old-school logo throughout passing design trends and fads, Coca-Cola maintained its iconic status. 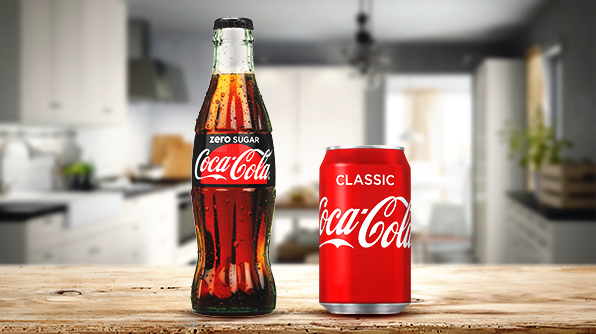 Starbucks’ mermaid logo concept originally dates back to 1971, but it was significantly simplified and turned into a “proper” logo in 1987. Since then it has had a couple more iterations, the most recent of which in 2011 stripped away the text and just left the circular logo graphic.

The evolution of Starbucks’ logo

Starbucks is a great example of how the primary purpose of a logo is to spark recognition, rather than to literally explain what a company sells. Naked mermaids might not seem like the obvious choice for a coffee company. However, for exactly this reason, Starbucks’ logo has made it a highly distinctive brand in spite of intensifying competition. The way that the logo has been graphically simplified over the years only adds to its memorability.

It’s easy to forget that logo marks are created for manufacturing and industry standards as well as brands. Meet the Woolmark logo, which was commissioned via a design competition run by the International Wool Secretariat in 1964. (It’s a mark that indicates a garment is 100% wool.)

Franco Grignani, a well-known and respected Italian artist, was on the judging panel for the competition. However, the story goes thatGrignani was so disappointed with the quality of the entries coming in, that he snuck in a submission of his own using the pseudonym “Francesco Saroglia”.

Although Grignani voted for another entry, presumably to cover his tracks, it was his own design that was selected as the winner. The Woolmark logo became one of the most celebrated of the twentieth century.

Apple’s logo has survived major changes at the company, including periods of abject commercial failure in the 1990s and the world-beating success of recent years.

The original logo, featuring Isaac Newton, was made by Steve Jobs and Ronald Wayne. It only lasted a year.

Its story is similar to the Starbucks logo, in that it began life as an elaborate engraved illustration of Isaac Newton discovering gravity (hence the apple). But, unlike Starbucks, its abstraction to the simple icon we know today happened all at once, when Rob Janoff created the multicolor striped version in 1977. Since then, the shape has stayed the same, though it has been styled in a number of different ways since 1999.

Nike’s “swoosh” is one of the most famous symbols out there, but its beginnings weren’t so grandiose. It was created back in 1971 by designer Carolyn Davidson, who was a student at Portland State University at the time. The brief was to capture the idea of movement.

She was initially paid $35 to create the logo, though she later received Nike shares. The company now ranks at number 89 in the Fortune 500, with a market valuation of over $100bn. That was $35 well spent.