Information or irritation? Brand promotion might not seem like the best idea during the coronavirus crisis, with people taking to Twitter to express their annoyance at being sent marketing emails from companies they haven’t heard from in years.

And most ad agency executives agree that trying to advertise during unprecedented times is a difficult balance. “There’s a very fine line between being helpful and flogging stuff on the back of a crisis,” Ian Henderson, chief executive of ad agency AML Group, told CNBC by phone.

There’s a very fine line between being helpful and flogging stuff on the back of a crisis.

“It’s a bit like walking down the street at the moment. People are being courteous and walking around each other and giving each other space and not making other people anxious,” he said, referring to the social distancing measures governments have put in place – and that’s how brands should be with their customers. “We would certainly look at any creative work or strategy through the filter of ‘Is this appropriate? Is this going to upset people?’” Henderson said.

AML’s clients are largely in financial services and the agency is still busy, despite predictions of a likely fall in global ad spend. One client is U.S. investment company Vanguard, whose current ad campaign is continuing, and for other clients, ads are simply being shifted away from billboards and toward digital media – and more traditional formats too.

“People are watching a lot of telly and it turns out people are buying a lot more newspapers, especially broadsheets, than they were a couple of weeks ago,” Henderson said.

Spending time at home means there are more opportunities for people to see advertising. “Brands are shifting towards screens, which makes sense. Phones will be on no matter what, TV viewership is already higher than normal as people are indoors more,” according to Michael Scantlebury, founder at London ad agency Impero, in an email to CNBC.

So for brands that do decide to advertise, what’s the right way to do it?

For Tammy Einav, CEO of ad agency Adam&eveDDB, it’s a time that businesses have to tread extra carefully. “A brand’s relationship with its customers is always important, but it has never been more critical than it is today. In circumstances like these – which are frightening, uncertain and rapidly changing – clarity and reassurance is demanded,” she told CNBC by email. She cited the U.K. supermarkets that have given health-care workers dedicated shopping time as an example of this.

A brand’s relationship with its customers is always important, but it has never been more critical than it is today.

Other companies talk about “scenario planning” to work out the sales impact of reducing ad spend. Travel, hospitality and retail are all industries that have understandably cut their media buys according to Maggie Merklin, executive vice president at ad measurement company Analytic Partners. But others are more optimistic.

“There are also brands anticipating recovery from the pandemic and shifting spend to late Q2 (second quarter) and beyond in anticipation that there will be pent-up demand and an opportunity to regain lost sales,” she told CNBC by email.

Ad agencies like to shoot spots that look beautiful – even if they feature moldy burgers – but with filming canceled due to restricted movement, what will TV ads look like a few months from now?

For BBH, whose clients include Tinder, Nike and Google, ads can still go ahead without real-life TV or stills shoots. “We are ready to go with … animation, illustration, CGI (computer-generated images), VFX (visual effects), motion graphics, compositing, stock footage, user-generated footage and more,” wrote Will Lion, managing partner at BBH London in a brief to clients seen by CNBC. He cited an ad campaign for Audi, which was produced using CGI, and text-heavy ads for the Guardian newspaper, both done without shoots.

Acts not ads – We have seen this with Bacardi which is using distilleries to make hand sanitizer, Guinness which has pledged funds to bartenders, Essity which is in the process of switching some manufacturing to facemasks for health care workers and Asda which is injecting £5 million ($6.1 million) into their charity partnerships to provide free meals for those affected by COVID-19.

Ikea Spain produced an ad titled YoMeQuedoEnCasa (I Stay Home), released last week, showing a montage of people in different situations as if from the perspective of the house itself — Spain’s death toll has now surpassed China’s and it will extend its lockdown by two weeks, as of Thursday.

“I’m still the place where your children have grown up,” says text on the ad, and it encourages people to consider rearranging their furniture. It’s a spot that agency McCann Spain adapted from a 2017 ad, according to industry website AdAge. Ikea Israel also posted some instructions on its Facebook account, with the simple direction: “Stay Home” with a picture of a closed door and some toilet roll. 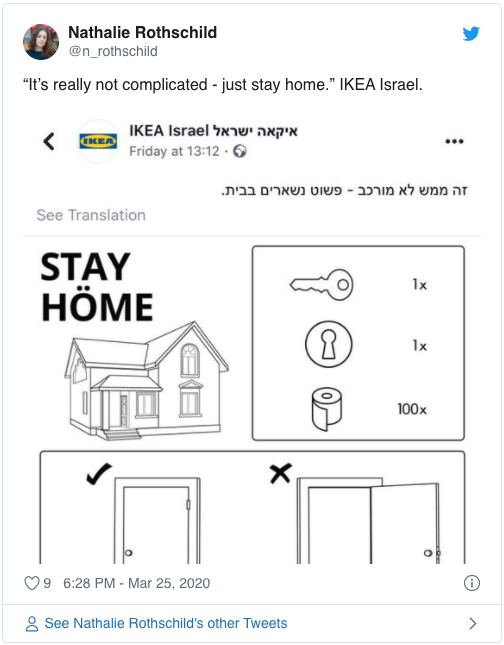 Sarah Douglas, CEO of AMV BBDO in London, said her agency is working with directors and animators who can work from home and also expects to use more archive footage. She suggested there are two ways brands can go in the crisis.

“The first is in practical help. Acts not ads. So we have seen this with Bacardi which is using distilleries to make hand sanitizer, Guinness which has pledged funds to bartenders, Essity which is in the process of switching some manufacturing to facemasks for health care workers and Asda which is injecting £5 million ($6.1 million) into their charity partnerships to provide free meals for those affected by COVID-19.”

Brands have always had a hugely significant role to play in driving culture and this is ever more relevant in times of crisis.

A focus on joy is another way to communicate.

“Brands have always had a hugely significant role to play in driving culture and this is ever more relevant in times of crisis. McDonald’s distancing the arches was genius,” she told CNBC by email, referring to the fast-food chain tweaking its logo in Brazil — which also attracted some criticism.

Lion agreed that lightening the mood could be the way to go – but warned: “Only if your brand has credibility to be lighthearted should you do this.” He cited newspaper Private Eye’s front cover which stated “48 sheets of toilet paper free with this issue,” on its March 18 cover.

The postponement of the Olympics to summer 2021 is a huge blow to broadcaster NBC, which said it had sold more than $1 billion in advertising.

Some of those ad deals will follow into next year, according to Forrester Principal Analyst Jay Pattisall, but don’t expect all events to shift to 2021 successfully. “There’s only so much consumer attention and bandwidth. There’s only so many venues for events to be rescheduled,” he told CNBC by phone.

Richard Robinson, managing director of consultancies Oystercatchers and Econsultancy, said that the crisis will cause ad agencies and clients to review their relationships.

“If you’re a brand or an agency, take this time to ask yourself when the last time was you looked at your common purpose, joint philosophy, ways of working, commercial terms and scope of work … Will it prevail?” he told CNBC by email.

For Impero’s Scantlebury, the issues are temporary.

“Long term, normality will resume. I would expect a sharp return to confidence. We are not dealing with a fundamental economic problem, we’re dealing with a virus with an economic impact. Once it goes, the economy and people will bounce back.”

You’re laughing at the Apple AirPods Max now, but Apple will have the last laugh – TechRadar

Ketchup isn’t even American – The Language of Food explains how tomato sauce has origins in Vietnam, Cambodia and Indonesia dating back to the 17th century – South China Morning Post

The Perfect Balance: How Luxury Brands Can Maintain Exclusivity And Still Be Relatable Online – Forbes