Australian activewear brand Lorna Jane was fined AUD$5 million by a court on Friday after claiming its garments could protect people against COVID-19, which a judge labelled as “exploitative, predatory and potentially dangerous”.

The Brisbane-headquartered company claimed its anti-virus activewear had been sprayed with a substance called “LJ Shield”, which “eliminated”, “stopped the spread” and “protected wearers” against pathogens, including COVID-19.

Advertisements on the company’s website, stores and Instagram made the claim: “Cure for the Spread of COVID-19? Lorna Jane Thinks So”.

The behaviour of Lorna Jane can only be described as exploitative, predatory and potentially dangerous.

The Australian Competition and Consumer Commission (ACCC) launched court action against the company, accusing it of making false and misleading claims.

In a decision delivered in the Federal Court of Australia on Friday, Justice Darryl Rangiah said Lorna Jane sought to “exploit the fear and concern” surrounding the deadly outbreak.

“The advertising campaign was conducted in July 2020, at a time of considerable uncertainty, fear and concern amongst the public about the consequences and spread of COVID-19,” Justice Rangiah said.

“Lorna Jane sought to exploit that fear and concern of the public through the use of misleading, deceptive and untrue representations about the properties of LJ Shield activewear.

“Lorna Jane sought to profit from the fear with concerns of the public in a way that involves unlawful conduct in contravention of the relevant provisions of the Australian Consumer Law. 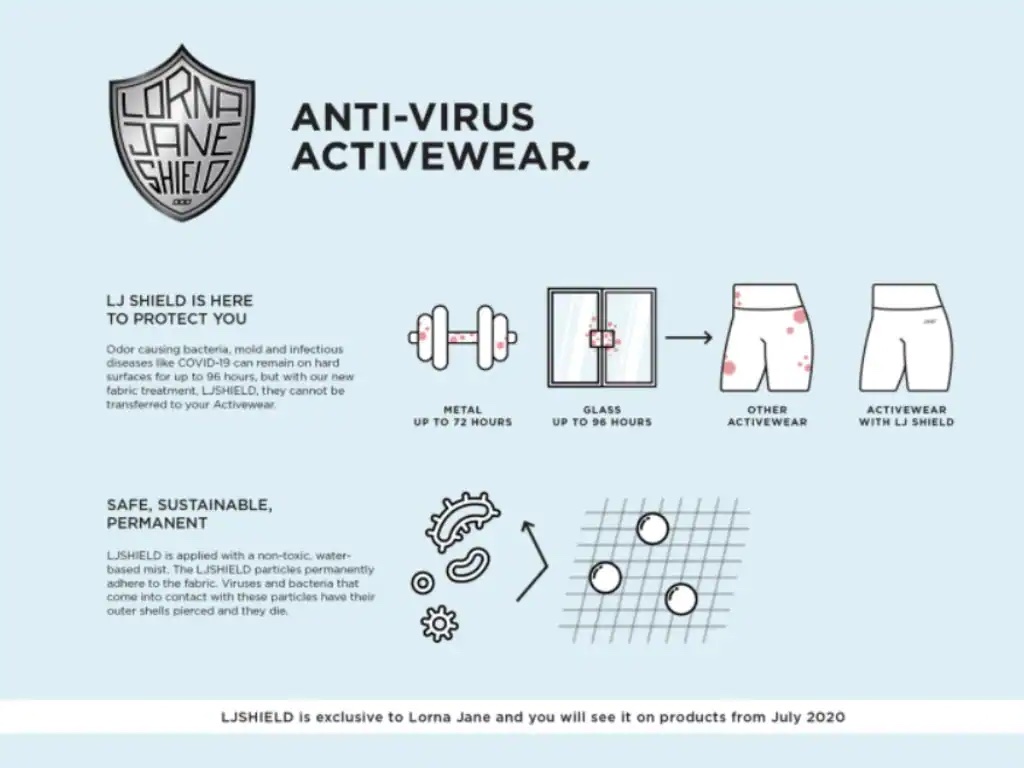 “The behaviour of Lorna Jane can only be described as exploitative, predatory and potentially dangerous.”

Justice Rangiah said the court must impose a substantial penalty to reflect the conduct’s seriousness and demonstrate “exploitative conduct of this kind will not pay”.

He found the company had not been shown to have actually profited from its conduct and said the $5 million fine agreed by both parties on the eve of the hearing was appropriate.

He also ordered Lorna Jane to pay the ACCC’s costs of AUD$370,000 and to publish “corrective notices” on its website, social media, customer emails and in stores about the LJ Shield false claims.

Lorna Jane falsely promoted its LJ Shield activewear as eliminating or providing protection from COVID amidst growing numbers of COVID-19 cases in Australia.

Lorna Jane said it accepted the court’s ruling and acknowledged that it had unintentionally misled customers as a result of being itself misled by a supplier.

“A trusted supplier sold us a product that did not perform as promised,” said CEO Bill Clarkson in a statement.

“They led us to believe the technology behind LJ Shield was being sold elsewhere in Australia, the USA, China and Taiwan and that it was both anti-bacterial and anti-viral.

“We believed we were passing on a benefit to our customers.”

Lorna Jane has more than 130 stores stores across Australia, New Zealand, the United States and Singapore.

Marketing Growth Will Accelerate In The Post-Pandemic Era – Forrester