Sweden has delivered the world’s first shipment of steel produced without the use of fossil fuels, a major milestone on the road towards cutting carbon emissions from industry.

A shipment of the steel was delivered to Swedish truck maker Volvo AB, but industrial quantities of the stuff won’t be available until 2026.

The news is significant in the context of efforts to limit climate change. While much emphasis has been placed on the role of fossil fuels in electricity generation, research published by Carbon Brief shows that just 553 conventional steel plants worldwide are responsible for 9% of all carbon dioxide emissions, owing to the large quantities of fossil fuels—in particular coking coal—used to produce the alloy. The IEA forecasts that steel production globally will grow by a third through to 2050.

Industry and especially the steel industry create large emissions but are also an important part of the solution.

Speaking at a press conference, the Swedish minister for business, industry and innovation Ibrahim Baylan said he was “happy to be minister for enterprise and energy in a country where industry is bubbling with energy for a [green] reset.”

Baylan further noted: “Industry and especially the steel industry create large emissions but are also an important part of the solution.”

The steel was created using the HYBRIT process, the result of a joint venture between Swedish steelmaker SSAB, energy company Vattenfall, and iron ore miner LKAB. HYBRIT replaces fossil fuels both in the production of the iron pellets that are the key ingredient of steel, and in the removal of oxygen from the iron by replacing carbon and coke with green hydrogen. 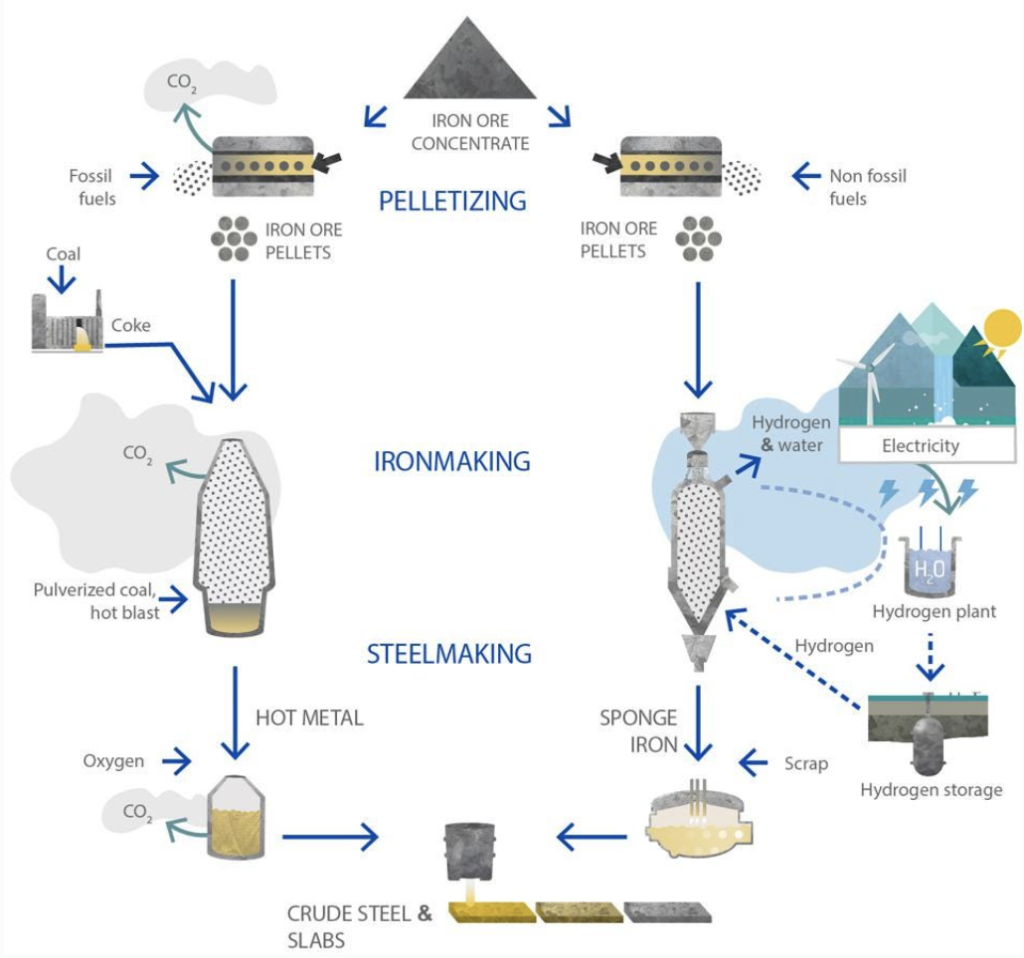 Comparison of conventional fossil fuel-based steelmaking process versus the
new approach from HYBRIT, a collaboration between three Swedish firms.

The whole country of Sweden produced just over 45 million metric tons of CO2 emissions in 2020, but across all its operations SSAB was responsible for almost 9 million. HYBRIT claims that by eliminating fossil fuels from the steelmaking process, it could reduce Sweden’s total CO2 emissions by “at least” 10%.

Martin Lindqvist, CEO of SSAB, told media: “The first fossil-free steel in the world is not only a breakthrough for SSAB, it represents proof that it’s possible to make the transition and significantly reduce the global carbon footprint of the steel industry. We hope that this will inspire others to also want to speed up the green transition.”

Anna Borg, CEO of Vattenfall, which is also responsible for some of Europe’s largest wind farms, said HYBRIT “shows how partnerships and collaboration can contribute to reducing emissions and building competitiveness for industries.”

The first fossil-free steel in the world is not only a breakthrough for SSAB, it represents proof that it’s possible to make the transition and significantly reduce the global carbon footprint of the steel industry.

SSAB, LKAB and Vattenfall say they will begin full industrial production of the new steel in 2026. Earlier this year, Volvo announced that it would be the first manufacturer to produce vehicles from fossil-free steel.

While HYBRIT might be the first to deliver, it’s far from the only project working on the challenge to create “green steel.” Other Swedes are racing to be the first to create industrial quantities, with H2 Green Steel claiming it will be up and running by 2024.

Outside Europe, China’s Baowu, the world’s largest steelmaker, has committed to achieving net zero carbon emissions by 2050, and is beginning to develop hydrogen technologies as a way to cut fossil fuels out of production. India’s Tata steel has developed what it calls the HIsarna process, which still uses coal but claims to reduce emissions by 20%. Meanwhile, Japan’s COURSE 50 project uses a range of technologies to reduce emissions from the blast furnace.

This article was originally published on Forbes. You can view the original article here.