Cristiano Ronaldo has wiped billions of dollars off Coca-Cola’s market value after he removed two Coca-Cola bottles from his Euro 2020 press conference table.

Upon taking a seat at the press conference table, Ronaldo moved the bottles out of shot and replaced them with his own bottle, filled with water, declaring “agua!” – water in Portuguese.

The company’s share price has not fully recovered after the 1.6% dip.

“Players are offered water, alongside Coca-Cola and Coca-Cola Zero Sugar, on arrival at our press conferences,” said a Euro 2020 spokesperson in specific reference to the Ronaldo water incident.

“Everyone is entitled to their drink preferences”.

A day after Ronaldo moved the Coca-Cola bottles, France midfielder Paul Pogba removed a bottle of Heineken beer that had been placed in front of him at another news conference.

Pogba, a practising Muslim, removed the bottle when he sat down to speak to the media after he was named man of the match in France’s 1-0 Group F win over Germany.

Reuters has requested comment from Heineken, which is one of the official sponsors of Euro 2020. 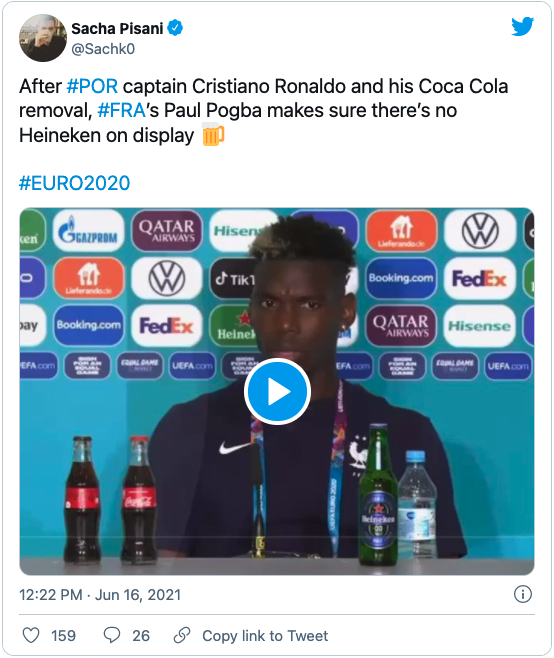 EDITOR’S NOTE: This article incorrectly states Ronaldo’s gesture wiped $4 billion from Coca-Cola’s stock value. The company’s stock price, however, had begun to dip before the gesture, and there is no evidence of a causal relationship between the gesture and the stock price.