A new law in Norway makes it illegal for advertisers and social media influencers to share promotional photos online without disclosing whether the images were retouched, The Hill reported Thursday.

The new law passed in Norway’s parliamentary body, Stortinget, with a vote of 72-15 on June 2. It’s set to go into effect when the King of Norway decides it should, according to the legislative decree. The law is an amendment to the 2009 Marketing and Control Act.

The law concerns advertisers and people who receive “payment or other benefit” in exchange for their posts, according to W Magazine. It will impact “brands, companies, and influencers’ sponsored and gifted posts,” and concerns posts on all social media sites.

The amendment requires disclosures for edits made after the image was taken and before, such as Snapchat and Instagram filters that modify one’s appearance. According to Vice, examples of edits that people who are being paid for pictures are required to label include “enlarged lips, narrowed waists, and exaggerated muscles,” among other things.

In the initial proposal sent to the Norwegian parliamentary body, the Ministry of Children and Family Affairs (Ministry) cited several studies to support their case, pointing out that “anorexia is the third most common cause of death among young girls,” according to the National Institute of Public Health.

Young people today are growing up to a completely improbable beauty ideal.

Body pressure, or “kroppspress” in Norway, is a major topic of conversation in the country, the Ministry said in its report.

“Young people are exposed to a massive pressure to look good out [sic] through, among other things, advertising and social media, and the models displayed are often digitally retouched,” the Ministry said in the proposal, an English translation of which was reviewed by Insider. “This exposes young people to an ideal of beauty that is impossible to achieve.”

By prohibiting advertisers and influencers from posting doctored photos without proper documentation with a government-authorized label, the Ministry said it hopes to lessen the negative impacts of body pressure on young people.

“It is especially important to counteract the desire to do more intrusive and (long) lasting changes in [one’s] own look,” the Ministry said.

Some of Norway’s top influencers, such as author Martine Halvorsen, presenter Janka Polliani, and YouTuber Agnete “Agnetesh” Husebye, have already taken positively to the news, according to interviews they gave to the Norwegian newspaper Verdens Gang this spring. 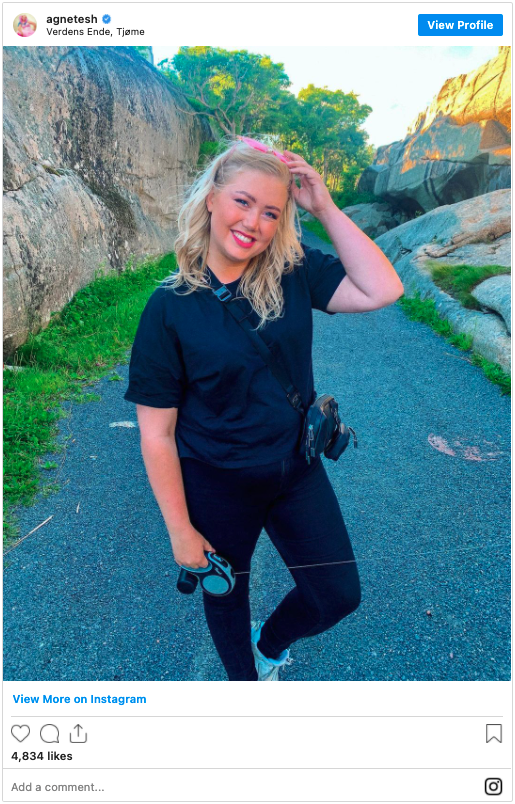 One of Norway’s top influencers, Agnete Husebye, told a Norwegian outlet that
she supports the country’s new law prohibiting doctored photos without a label.

“Young people today are growing up to a completely improbable beauty ideal,” Husebye, who was awarded “Influencer of the Year” at the 2019 VIXEN awards gala, told Verdens Gang. “I feel that this [new law] can only help them to understand that this is not how you look, it has been edited.”

Other countries have previously imposed similar measures. In September, a legislator from the United Kingdom proposed a bill called the Digitally Altered Body Images Bill, which would require disclosures on social media posts denoting the use of a filter or alteration. In February, the United Kingdom’s Advertising Standards Authority banned social media influencers from using unrealistic beauty filters in advertisements, according to Glamour.

France announced a new law in 2017 that made it so any “commercial image that has been digitally altered to make a model look thinner will have a cigarette-packet style warning on it,” according toThe BBC.

The United States Congress introduced the Truth in Advertising Act in 2014, which was partially intended to protect consumers from negative body ideal messages, according to the University of Cincinatti Law Review, though the law did not pass.

This article was originally published on Insider. You can view the original article here.