The global economic effects of the COVID-19 pandemic are already taking shape, as markets tumble and countries take emergency actions to respond.

As global habits change to adapt to the new realities of the outbreak, consumer spending also appears likely to fall, and the impacts could have far-reaching effects on the media, sports and entertainment industries.

Here are four ways the novel coronavirus could affect these industries in the coming months.

Major shortfall in revenue from events

Postponed or cancelled events could lead to a decline in revenues for the event organizers as well as for media that broadcast them. Cable television companies are partly dependent upon advertising, meaning that any decline in revenue will impact profitability.

The professional sports industry is already heavily affected. In the US, the National Basketball Association (NBA) and National Hockey League (NHL) have both suspended their seasons indefinitely. Major League Baseball (MLB) and Major League Soccer (MLS) have delayed or suspended their seasons for (initially) 2-4 weeks and events on the Professional Golfers’ Association (PGA) Tour have been cancelled. In Europe, many football matches are being played without spectators and leagues are starting to act. The Premier League appears poised to suspend its season, as Serie A in Italy and La Liga has done in Spain, among others around Europe.

In addition, this summer is due to see UEFA’s Euro 2020 football tournament and the Tokyo Olympics and Paralympics, events shown to millions around the world. These are not easily replaced in a broadcaster’s programming schedule. As of this writing, the governor of Tokyo, which will host the Olympic Games, has said the event will happen, although some changes might have to be made.

But should things change, their postponement or cancellation could disrupt not only scheduled coverage but equally advertising arrangements, sponsorship deals and promotional events. According to The New York Times, in 1980, when the United States boycotted the Moscow Olympics, broadcaster NBC still lost $34m despite having insurance.

Lower spending outside the home

The expectation is that restrictions on movement and large gatherings will be in place for some time. This will result in lower spending on media strategies and advertisements targeted at consumers outside their homes.

Many countries have already introduced limits on social gatherings of large numbers of people. This has resulted in lower attendance at entertainment hubs like movie theatres as well as at restaurants and bars. For example, in Italy, which has seen more than 9,000 confirmed cases of coronavirus, the government ordered closures of cinemas, theatres and restaurants and told restaurants and shops to ensure that their customers stayed at least one metre apart.

It’s estimated that the outbreak could cause $5 billion in losses to the global film industry. In one case, given the global shakeups in cinemas, the makers of the new James Bond film, No Times to Die, postponed its release date from 31 March until November.

Furthermore, lower entertainment spending outside the home may have knock-on effects for brands trying to reach consumer through out-of-home media like radio and billboards. 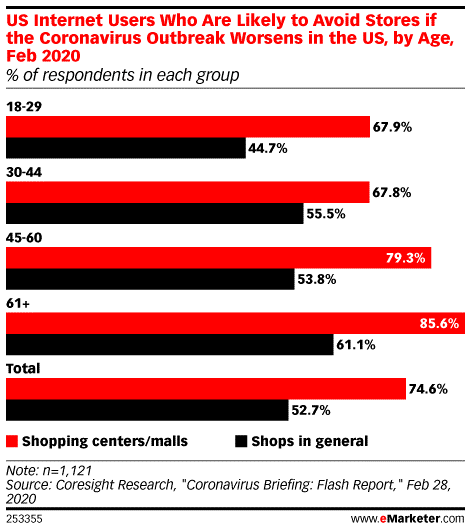 As more people stay home, self-isolation and quarantine measures could increase media consumption in the home. This may result in an increased use of entertainment services such as video on-demand and gaming.

In China, after the country implemented nationwide isolation measures, average weekly downloads of apps during the first two weeks of February jumped 40% compared with the average for the whole of 2019, according to the Financial Times. In the same month, weekly game downloads on Apple devices were up 80% versus 2019. Nielsen data from China during the coronavirus outbreak shows that traditional media also received a boost in consumption – TV viewership grew after Lunar New Year, when normally it experiences a dip. 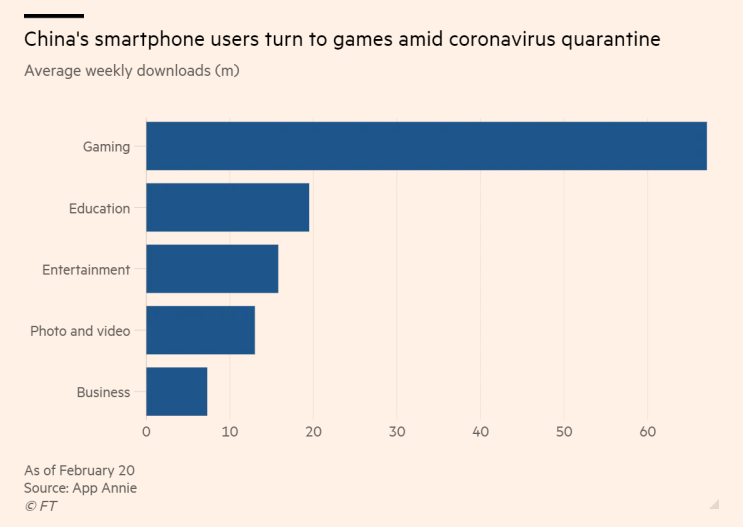 Consumers looking for information about coronavirus may increase news consumption, but for many news companies, this could be a double-edged sword. On the one hand, online subscription media could benefit if they can convince people stuck at home to pay to access coverage. On the other hand, advertising-funded publishers may encounter new challenges.

Brands often use keywords to place advertising online, and, to avoid certain associations, negative words are frequently excluded. In February, “coronavirus” became the second-most common word on block lists for publishers, meaning that important, in-demand and socially-relevant reporting is not bringing in the higher revenues it is capable of.

Major brands could decide to lower their advertising spending, as supply chain issues or reductions in sales affect their products. For example, consumer-packaged goods or manufacturing-related companies might decrease ad spending if there are inventory issues due to constraints in their supply chains, not wishing to risk marketing products that are not available. A survey of brands in China at the end of February showed that 7% had stopped advertising completely and 14% moving their budgets from offline spend to online. Industry sources predict that advertising growth rates in China will fall from 7% – predicted before the pandemic – to 3.9%.

Consumers may also reduce spending on non-essential items, which could impact how brands allocate advertising spend across their portfolio of products. Bricks-and-mortar retailers are widely expected to suffer a drop in sales. According to HBR, the most agile companies can redeploy new sales channels to account for shortfalls – one beauty company in China achieved 200% growth in year-on-year sales after hiring online influencers to push their products online.

What does this mean for the long-term?

It is difficult to say what the long-term impacts of coronavirus will be on the media industry because nobody knows exactly when things will return to normal. The extent of the disruption will likely depend on the type of content that media companies produce and distribute.

In the news industry, for example, many companies have used live events as a diversification strategy to offset declines in print revenues. Many of them may not be able to absorb the hit to their bottom lines if large-scale events are cancelled indefinitely. How will that affect our news diets?

The film, TV and video industries can only maintain output if their physical operations are maintained. Already, movies and shows shot in China, South Korea and Hong Kong have faced delays; on-location content produced in Italy has been halted entirely. Would you still subscribe to Netflix if it couldn’t add new shows to its library?

Even media giants are not immune: “ecosystem” companies that use media to drive revenues to other parts of their business will also face disruption. Disney has announced it will close every one of its theme parks around the world, as well as suspending its cruise lines until the end of March at least. Disney may be one of the most well-known content producers on the planet, but 34% of its revenues come from theme parks and another 8% from consumer products.

Finally, if sports stadiums are forced to close their doors for the long term, they could lose their allure to broadcasters. Would these competitions be as good, or as popular, without the live atmosphere that fans create?

Ultimately, the most important thing for the media and entertainment industry is to help slow down the spread of the virus and keep people informed about what people should do to stay safe. With luck, these disruptions will just be temporary. Beyond this, the industry is in uncharted waters.