KFC couldn’t have chosen a worse time to launch a commercial that consists of people licking their fingers for a minute straight.

The “Finger Lickin’ Good” campaign, which debuted in the United Kingdom and Ireland in late February, features a quick succession of artistically lit close-ups set to Frederic Chopin’s “Nocturnes.” In shot after shot, diners savor the taste of the chain’s fried chicken by sticking their spice-coated hands in their mouths (or their companions’ mouths) and licking them clean.

Under the best of circumstances, the ad was liable to upset germaphobes. But with the novel coronavirus spreading through Europe, some viewers found it downright irresponsible. More than 150 people complained to the U.K.’s advertising review board, the Drum reported. On Thursday, KFC pulled the ads. 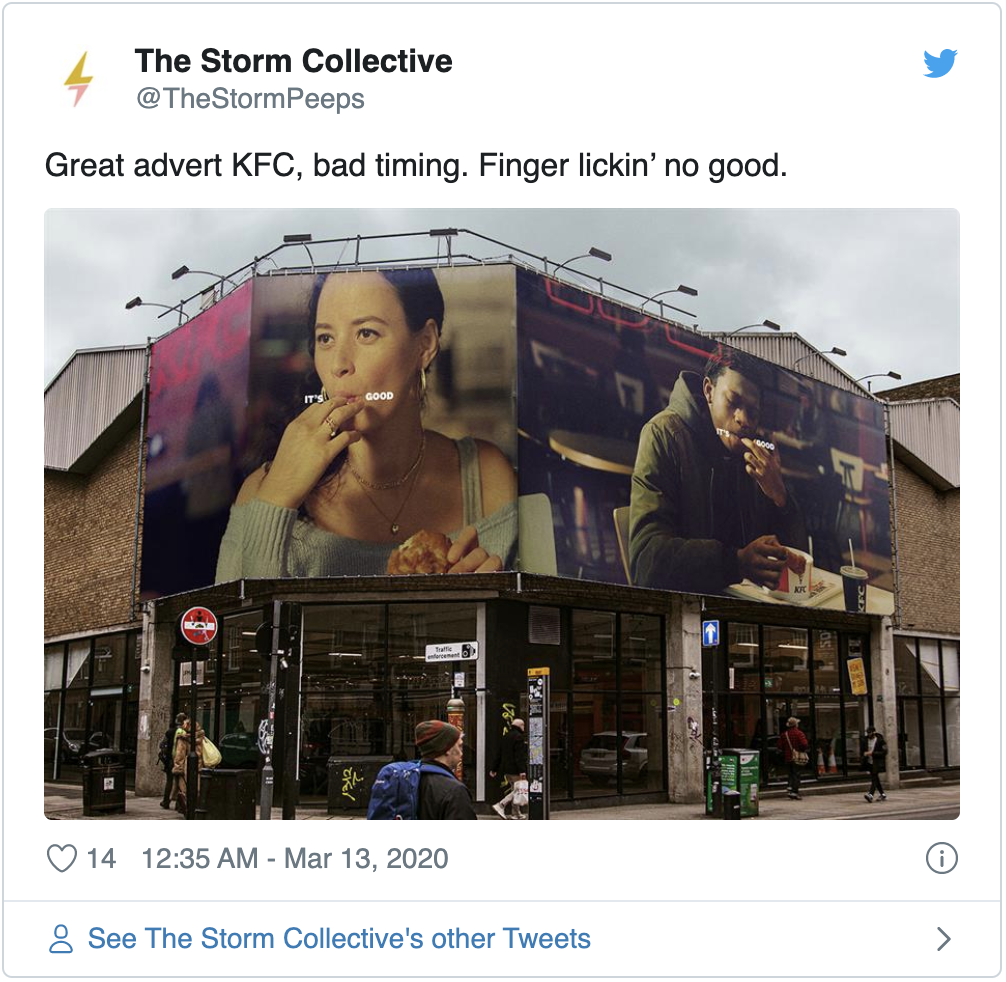 The fast-food chain isn’t alone. In recent days, Coors Light and Hershey Co. have also pulled ads over fears that depicting hugs and handshakes or making jokes about working from home could be seen as insensitive. But not all brands are being quite so cautious: On Thursday, Spirit Airlines apologized for sending out an email blast with the subject line, “Never A Better Time To Fly.” 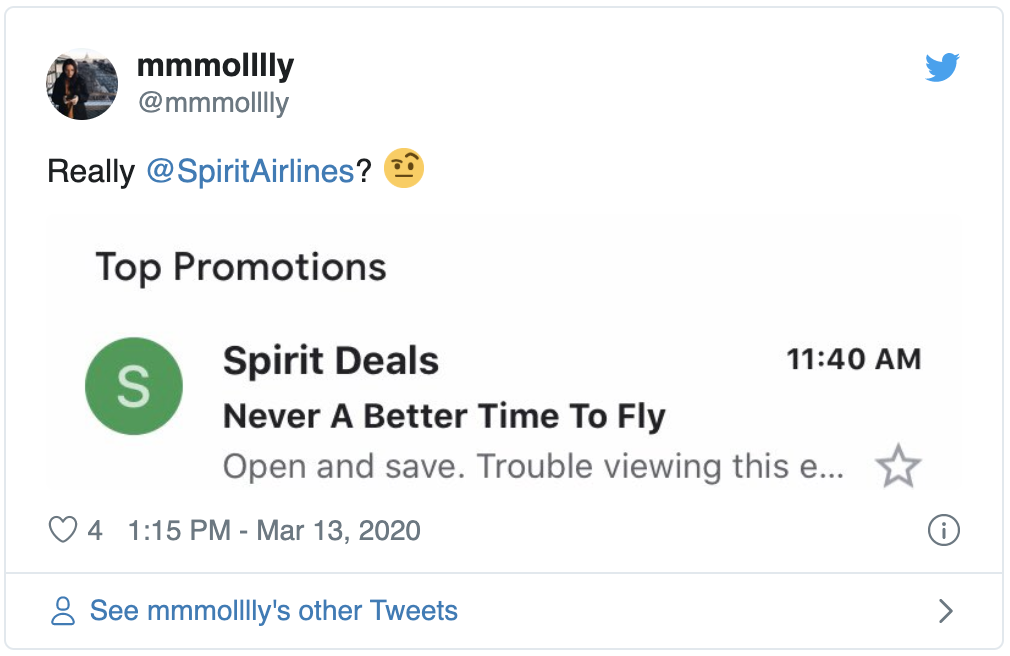 According to the Drum, KFC’s finger-licking ad prompted 163 people to complain to the Advertising Standards Authority, the U.K.’s advertising regulator. Many of those critics said that it was “irresponsible” for the fried-chicken chain to encourage people to put their hands in their mouths at a time when face-touching is off-limits.

But the company decided to pull the ads even before it was notified about the complaints, Ad Age reported. To date, 459 confirmed cases of the novel coronavirus have been reported in the U.K., and eight deaths have been attributed to the infection. A spokesperson told the outlet that it didn’t “feel like the right time” to be airing the commercial. 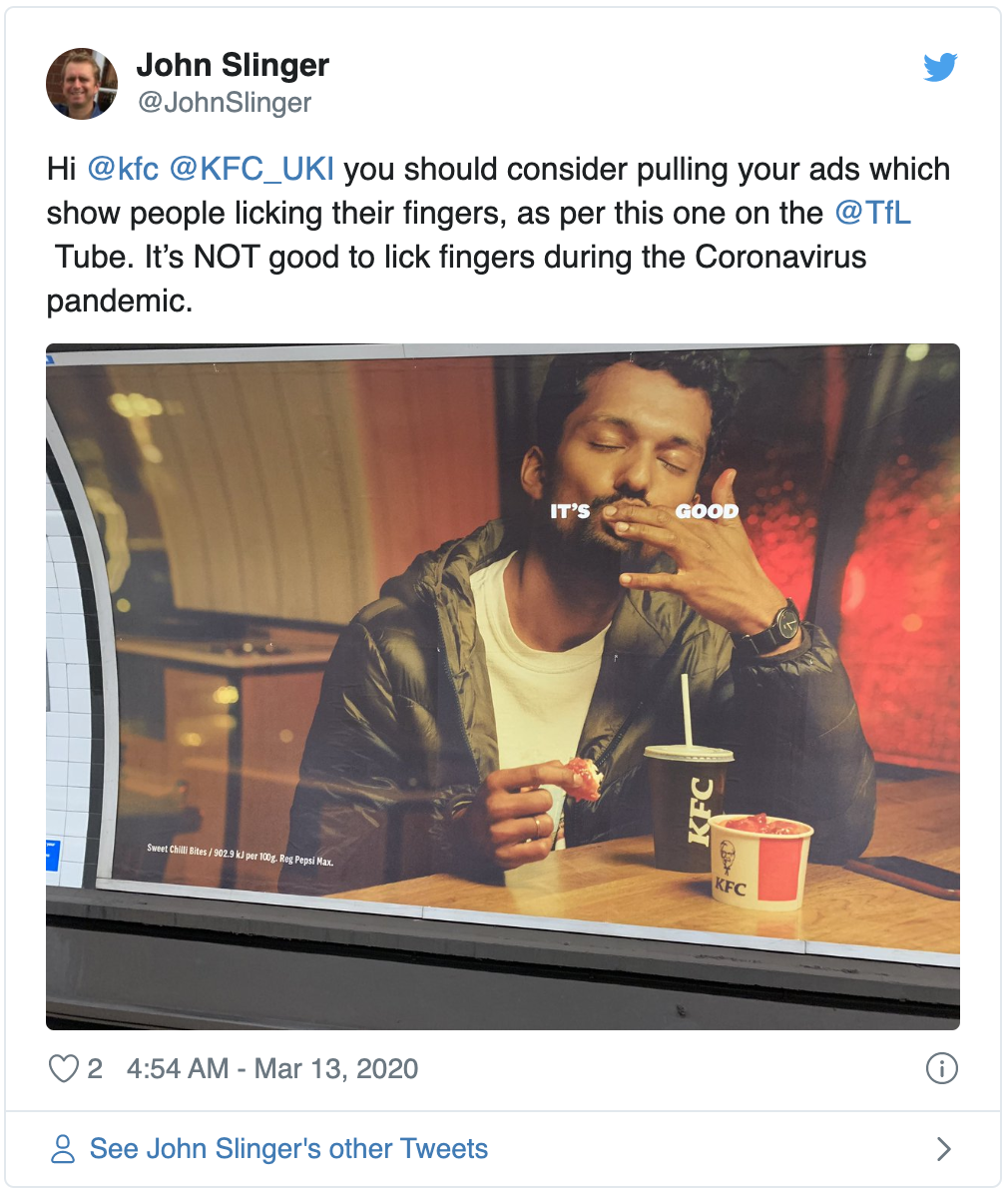 Hershey Co. made a similar call last week, pausing ads that had been running in the United States and showed people handing chocolate bars to strangers and exchanging handshakes and hugs. In a move that struck some as an overreaction, the candy-maker attributed the decision to concerns about the risks of human contact.

“Sadly, we have decided to temporarily replace two of our ads that feature human interaction, that include hugging and handshakes, due to the current sensitivities surrounding the COVID-19 virus,” Hershey Co. chief marketing officer Jill Baskin said in a statement to Ad Age.

In yet another sign of the times, Ad Age reported, Coors Light canceled its “Official Beer of ‘Working’ Remotely” campaign on Wednesday. The ad was slated to run during March Madness and played on the idea that people who say they’ll be “working remotely” this month are actually kicking back and watching college basketball.

The last thing we want is for our communication to seem insensitive or be misinterpreted.

But at a time when many companies have asked their employees to work from home to reduce the risk of transmitting the virus, the company decided to put the spots on hold, and asked distributors to stop putting out “Working Remotely” coasters and banners at bars and restaurants. On Thursday, the NCAA canceled both the men’s and women’s college basketball tournaments, as well as the rest of its winter and spring championships.

“The last thing we want is for our communication to seem insensitive or be misinterpreted,” Molson Coors chief marketing officer Michelle St. Jacques said in a memo to distributors that was obtained by Ad Age.

Meanwhile, some subscribers to a Spirit Airlines mailing list were surprised when the budget carrier informed them on Thursday that there had never been a better time to fly. “Off you go!” declared the email, which teased round-trip flights for under $115 next to a picture of a woman doing yoga by a lake. 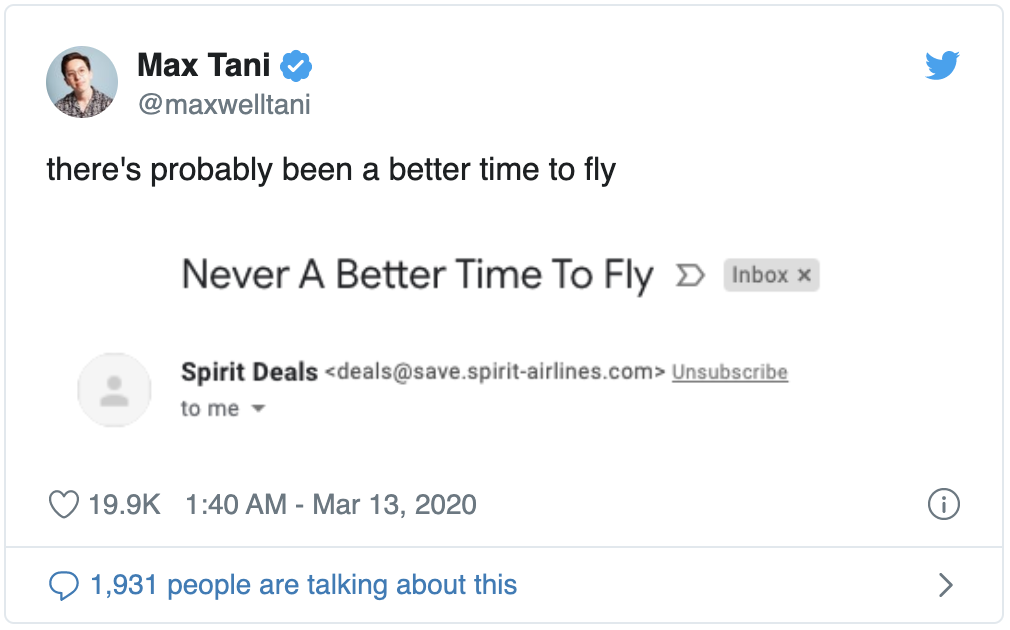 While some travelers have been risking contagion to take advantage of rock-bottom airfares, the seemingly tone-deaf marketing scheme was actually an accidental oversight on Spirit’s part, the carrier told Business Insider. 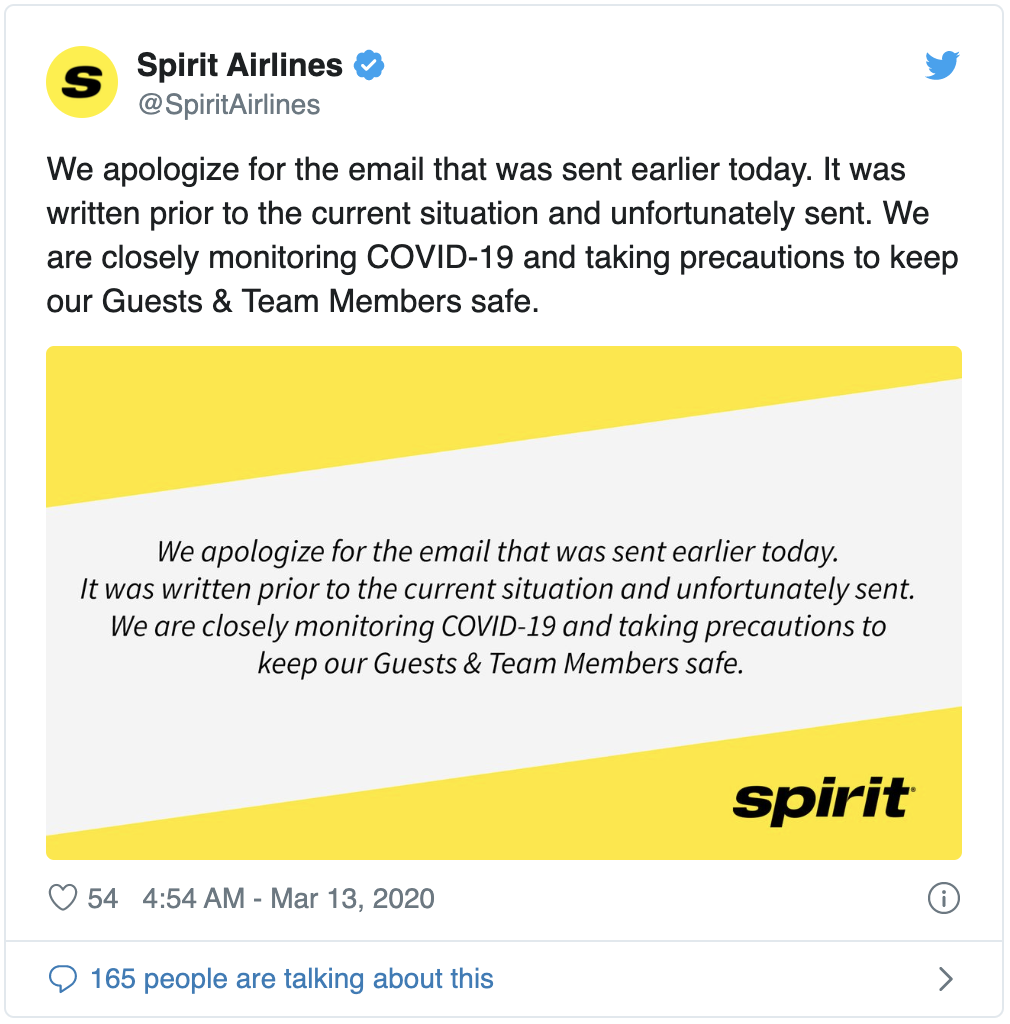 “This was an email prepared before coronavirus developed into a pandemic and it went out inadvertently today,” said spokesman Field Sutton, adding the company had quickly realized its mistake and stopped the email from going out to any more customers after it reached 25 percent of the list.

The severity of the global pandemic will likely continue to be a dilemma for marketers, Kristen Ruby, the CEO of Ruby Media Group, recently wrote in Adweek. Referencing the disease to advertise an otherwise unrelated product can seem opportunistic, but ignoring the growing crisis by posting regularly scheduled tweets could come across as tone-deaf.

Her suggestion? Tell people to stay indoors. And order branded hand sanitizers and give them away free.

Brand reputation: why it matters now more than ever – Racountour

‘For Once, Don’t Do It’: Nike Once Again Dares to Take a Stand, Boldly Addressing Racism Head-On in New Ad – Forbes

Brand reputation: why it matters now more than ever – Racountour

Find out more or adjust your settings.