Lego is taking a firm stand in support of protestors and the Black Lives Matter movement. On Wednesday, June 2, Lego announced on Twitter that it would donate $4 million to “organizations dedicated to supporting black children and educating all children about racial equality.”

The toy company behind the popular The Lego Movie franchise and The Lego Batman Movie did not stop there, however, as it went on to announce that it would remove any marketing for any toy sets that include police characters or are based around a police theme.

An email acquired by Toy Book sent to Lego’s affiliate marketers requests removal of product listings and features for more than 30 Lego building sets, mini-figures, and accessories that include representation of police officers, firefighters, criminals, emergency vehicles, and buildings. Given the political undertones of The Lego Movie, it’s no surprise that Lego is putting its money where its mouth is in regards to issues pertaining to social justice. Everything is not awesome, but Lego is doing its part to fix that. 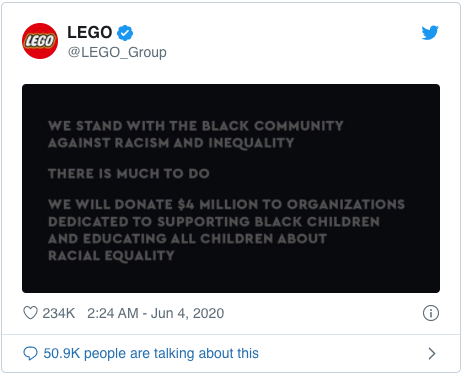