On Friday night, as U.S. television screens burned with images of peaceful protests turning violent, Nike released a new socially conscious ad calling on Americans to do something quite different than the brand’s usual call to “Just Do It.” Instead, one of the nation’s leading athletic apparel companies called on individuals to not turn their back on the painful issue of racism in the United States.

The ad, created by Wieden + Kennedy Portland, is a series of simple yet powerful statements set on a black background: 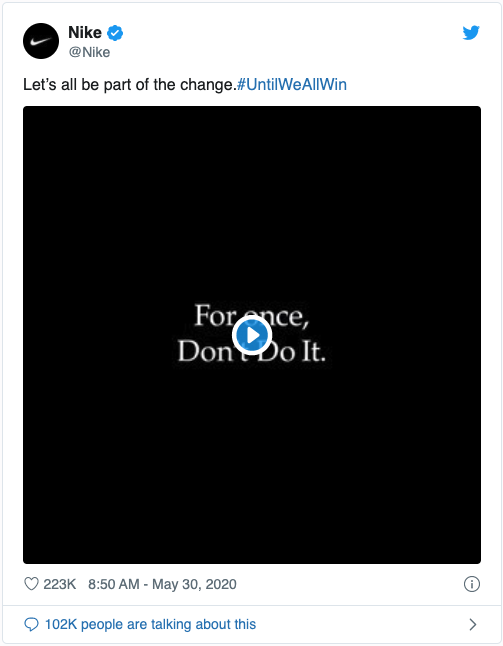 “Don’t pretend there’s not a problem in America. Don’t turn your back on racism. Don’t accept innocent lives being taken from us. Don’t make any more excuses. Don’t think this doesn’t affect you. Don’t sit back and be silent.”

This ad isn’t the first time the athletic brand has waded into the complex conversation of race in America. In 2018, as part of the 3oth anniversary of its ‘Just Do It’ campaign, Nike released a powerful ad focused on former NFL player and activist Colin Kaepernick that prompted both praise and criticism. But while the Kaepernick ad was part of a carefully choreographed campaign released in tandem with the start of the 2018-2019 NFL season, the most recent ad was an urgent response to the racial turmoil gripping America since the killing of George Floyd by Minneapolis police officers last week.

While Nike cannot solve injustice, what we can do is inspire and empower ourselves and others to action – and try to help shape a better society by serving as a beacon of hope and resilience.

It is clear that the company’s top leadership feels strongly about the role it believes Nike should play in these racially fractured times. According to Footwear News, in an internal memo from Nike President and CEO John Donahoe to Nike employees circulated Friday night, Donahoe was as personal as he was unambiguous.

“I’ve been asking myself how to respond during times like these, both as a citizen and as a member of the Nike family,” Donahoe wrote. “Let me be as clear as I can: Nike is opposed to bigotry. We are opposed to hatred and inequality in all its forms, indirect and overt. While Nike cannot solve injustice, I believe we have a responsibility to work toward addressing it to the best of our ability. What we can do is inspire and empower ourselves and others to action – and try to help shape a better society by serving as a beacon of hope and resilience.”

Nike’s ad comes at a time when the nation is navigating not only heightened racial strife, but also a global pandemic that has laid bare the deep racial inequalities in the wealthiest nation on the planet. And with political division at an all-time high, individuals are increasingly searching for familiar voices they can trust during the crisis. That includes the brands and athletes they have been long familiar with.

So will Nike’s ad make a difference? That remains to be seen. But it gets credit for sharing an honest and hopeful message with a country looking for some glimmers of optimism amidst a dark moment in the nation’s history. By stepping forward and sharing both their pain and hope, Nike is modeling the kind of mindset that we all need if we are going to rise above our current challenges. And in the spirit of the final words of the ad: