Google is threatening to leave Australia over a proposed media law. It’s a battle the search giant is sure to face in other countries.

Last month, Google said it may stop providing search results in Australia if the government passes a new bill forcing it to pay the country’s publishers for the news links and snippets its search engine surfaces. Leaving Australia would deprive its 25 million citizens of the world’s most widely used search engine, which handles almost 95% of the country’s daily searches.

“We don’t respond to threats,” Australian Prime Minister Scott Morrison told reporters on Jan. 21. The country makes its own rules on “things you can do in Australia,” he added.

Tempers have since cooled, and Morrison had a “constructive” conversation with Google CEO Sundar Pichai last week. But the seven-month battle over Australia’s proposed News Media Bargaining Code bill, which also covers Facebook, is far from over. It moved to a new phase on Friday, when a bipartisan Senate committee released an inquiry report recommending the House of Representatives pass the bill.

It will be a very powerful precedent.

The clash between Google and Canberra will ripple far away from Australia’s pristine beaches. Countries around the world are reckoning with the havoc Google, Facebook and other tech companies have wreaked on their media landscapes. A Canadian minister has backed Australia’s proposed Media Code and called for Google and Facebook to pay publishers in his country. Alex Saliba, a member of European Parliament, told CNET that he wants to include similar measures in upcoming EU legislation. Competitors are watching too. Microsoft, Google’s chief search engine rival, has urged similar regulations in the US.

“It will be a very powerful precedent,” said Frank Pasquale, a professor at Brooklyn Law School who researches technology law and policy. “It is emblematic of a global fight by Google on regulatory actions on all levels.”

Entering the House of Representatives last December, the News Media Bargaining Code bill was designed by Australia’s competition watchdog, the ACCC, to force Google and Facebook to negotiate with publishers. It would require Google and local publishers to reach an agreement within three months of becoming law, or a government-appointed panel will decide the compensation. It also would require that Google inform publishers of changes to its algorithm before they take effect.

Google says paying for snippets that come up in search undermines the idea of an open internet. The company also argues the arbitration process is likely to result in unfairly high fees. The search engine’s exit from the country would be a “worst case scenario,” a Google spokesman said in a statement. “We remain committed to reaching a solution for a workable Code, as we have been throughout this whole process.” 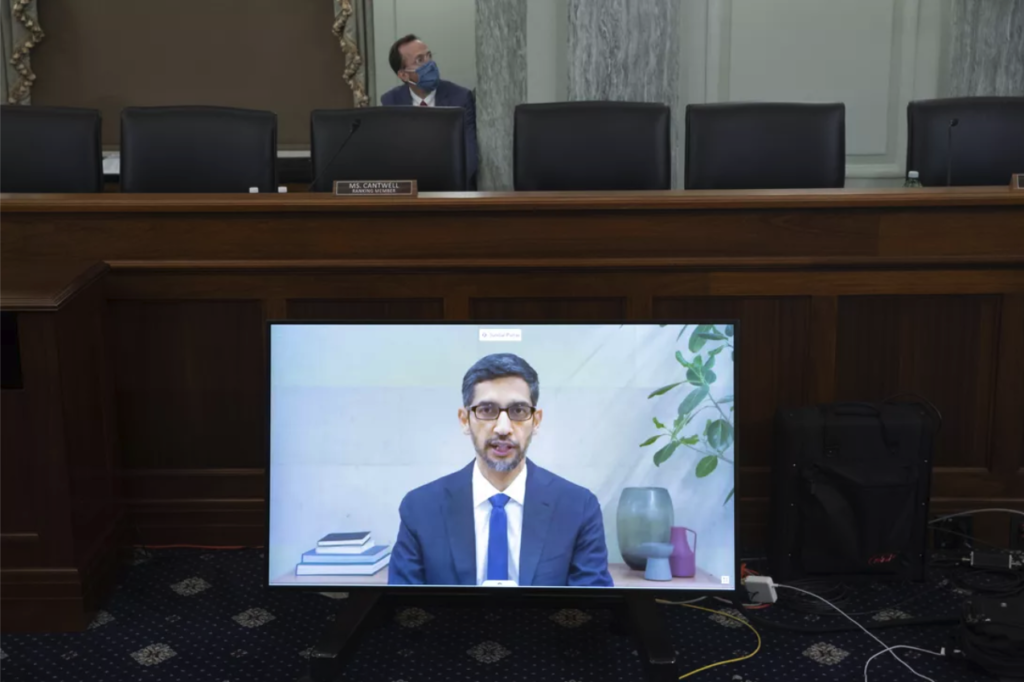 The Australian spat comes as governments around the world look to clamp down on big tech. Sundar Pichai,
CEO of Google-owner Alphabet, is seen here in October speaking remotely to a Senate committee in Washington.

Google’s threat to remove Search from Australia isn’t without precedent. The company removed its Google News product from Spain in 2014, when the government passed a copyright law forcing it to pay publishers for headlines and news snippets. Removing search from Australia will have little financial impact on the company: It made more than $160 billion in revenue in 2019, with around 2.5% of that coming from sales in Australia.

But cutting pesky markets isn’t a long-term strategy. Google search is already blocked from China, the world’s most populous country. The EU, which is also scrutinizing the company, will be much harder to walk away from.

Google is hoping to preempt legislation like Australia’s by expanding its News Showcase, a feature in the Google News app on Android and iOS that delivers curated news from participating publications. After launching News Showcase in Germany and Brazil last October, Googled brought the initiative to Australia in early February as Australia’s senate deliberated the News Media Code bill. Google has committed $1 billion to publishers via News Showcase over the next three years.

Seven Australian publishers joined the project at launch in early February. One of the country’s biggest media companies, Seven West Media, has since signed up too. But confidentiality agreements prevent them from revealing how much Google pays them. The Australian Financial Review has reported that the publications will be paid between AU$200,000 and AU$2 million (US$150,000 to US$1.5 million). In France, 90 million euros (US$109 million) will be split between 120 publications over three years, according to the Sydney Morning Herald. 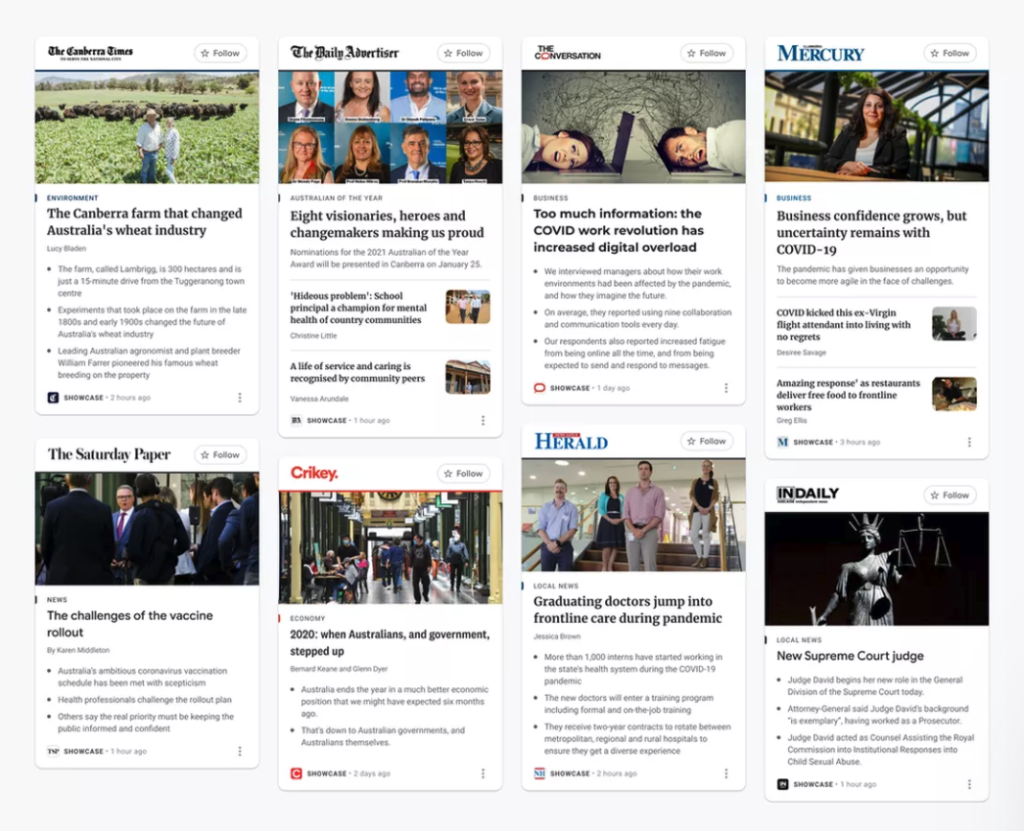 This satisfies some publishers like Reuters, which signed a deal to be part of News Showcase around the world. Germany’s Der Spiegel and Brazil’s Piaui national outlets have also welcomed the initiative.

But Nine Entertainment, a big publisher that owns both the Sydney Morning Herald and the Australian Financial Review, says Google and Facebook should pay publications about AU$900 million (US$695 million) each year. News Corp, which owns Fox News, is another big proponent of Australia’s proposed Media Code.

“This is what monopolies do, they put an offer, in the form of Google Showcase, but not offer to negotiate,” a Nine spokesperson said. “It has to be all on their terms, and that is not an approach we will participate in, we support the legislation the government is proposing as the best way to secure a fair payment for our content.”

Australia’s proposal has critics, including some publishers, who say the Media Code could have unintended consequences. The editorial boards of Bloomberg and the Financial Times have argued that news publications get more from Google and Facebook, through search engine and social media traffic, than the platforms get from the publications.

Amanda Lotz, a digital media professor at the University of Technology, Queensland, echoes this sentiment. She points to recent research done in the UK, which found that just 3% of the average person’s online time was spent reading news.

“If news was somehow not available on Facebook’s feed anymore, people would still spend the same amount of time on Facebook,” she explained. “With Google, it’s the same thing. Most of Google’s revenue is coming through search, and most searches have nothing to do with news.”

Google says 2% of searches in Australia are news-related. 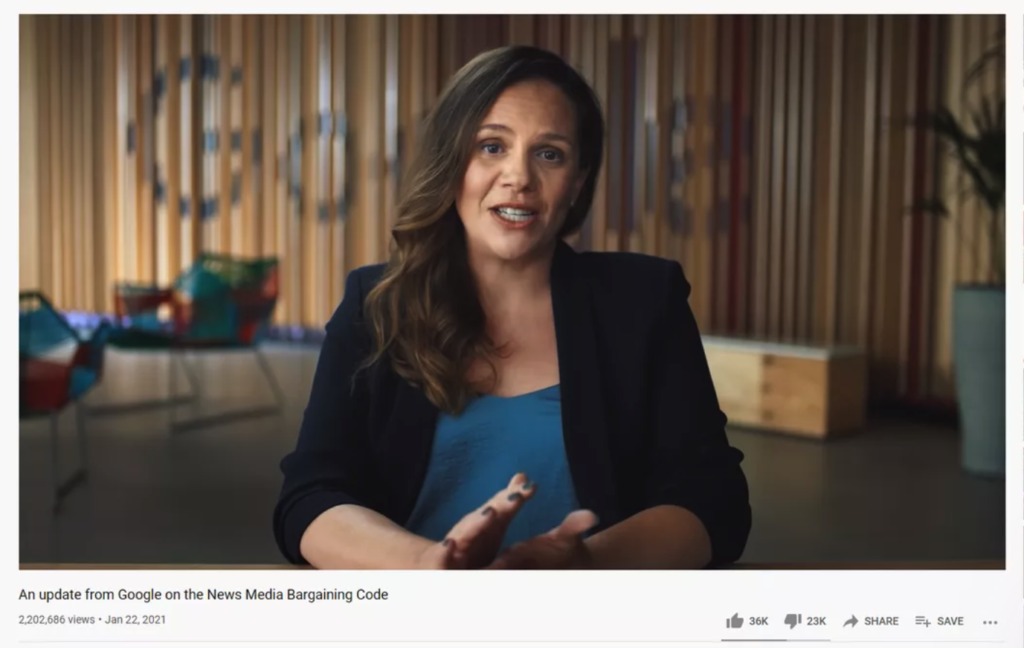 Google has gone on a PR offensive. Apart from a popup on Search explaining its reasons for opposing the code, a
video featuring Mel Silva, its managing director in Australia, was uploaded to YouTube and promoted heavily on Twitter.

Smaller publications have expressed concern that the Code balances power between Big Tech and Big Media, but does little for them. Last September, a group of 10 publishers wrote a statement to the ACCC outlining concerns with the Code. If the Code becomes law, many outlets would be too small to be eligible for payment, they said. Smaller publishers would also find it more difficult to compete with Nine or News Corp if they lost the traffic Google and Facebook provide, they added.

“We believe it is important for measures to be introduced to bring the Australian media industry to a more even playing field,” the statement read, “however we are concerned that the current proposal has potential to just further entrench the large traditional media companies and accidentally destroy media diversity in the process.”

A ‘paradox’ of a threat

Still, the Australian government’s effort is inspiring lawmakers around the world.

The EU is readying two pieces of legislation, the Digital Services Act and Digital Markets Act, designed to target Big Tech companies. The DSA will hold Google responsible for illegal content on its platform, like articles encouraging terrorism, and the DMA will enforce stricter anti-competition measures. The Media Code being proposed in Australia has already caught the eye of Alex Saliba, a member of European Parliament from Greece.

“Australia’s plans to make Facebook and Google pay for news content address the acute bargaining power imbalances they have over media organizations providing news services,” he said in a statement to CNET. “The only question is if the DSA and the DMA are the appropriate legislation to introduce such a system.”

In the US, Google’s search and advertising businesses are under increasing attack by lawmakers, as well as state and federal prosecutors. Google faces three major antitrust lawsuits, including a landmark case by the Department of Justice and a complaint by a bipartisan coalition of states. In response to those cases, Google has argued that competition “is just a click away.”

Australia, however, underscores Google’s dominance. Microsoft says its Bing search engine is ready to replace Google, but few see it as a true alternative.

Google’s threat to pull out of Australia is a “paradox,” said Pasquale, the Brooklyn Law School professor, because it undermines the argument the company has been making in the face of antitrust criticism. If competition is so abundant, Google’s ultimatum wouldn’t be such a powerful bargaining chip.

This article was originally published on CNET. You can view the original article here.