The rise in popularity of services such as Netflix, Amazon and Spotify prompted record spending on streaming music, films and TV shows in the UK last year to more than £3bn, as the digital revolution hammered high street sales of DVDs and CDs.

The total UK entertainment market, which also includes the video games sector, grew by 2.4% to hit a record £7.8bn in 2019, according to the latest annual sales and spending figures from the Entertainment Retailers Association (ERA). The report highlights the scale of the dramatic consumer shift towards internet-based services, from subscribing to Netflix or Spotify to buying or renting a film or box set on Sky Store or Apple’s iTunes, with more than 80% of total entertainment spend now on digital services. Digital video sales hit £2.1bn last year, while UK music fans spent £1bn on streaming services for the first time.

“The rise of digital entertainment has created the biggest revolution in UK leisure habits in history,” said Kim Bayley, chief executive of the ERA. “There is no doubt retailers of physical products had a tough time in 2019. The flipside to digital’s success has been increasing pressure on sales of physical formats.” 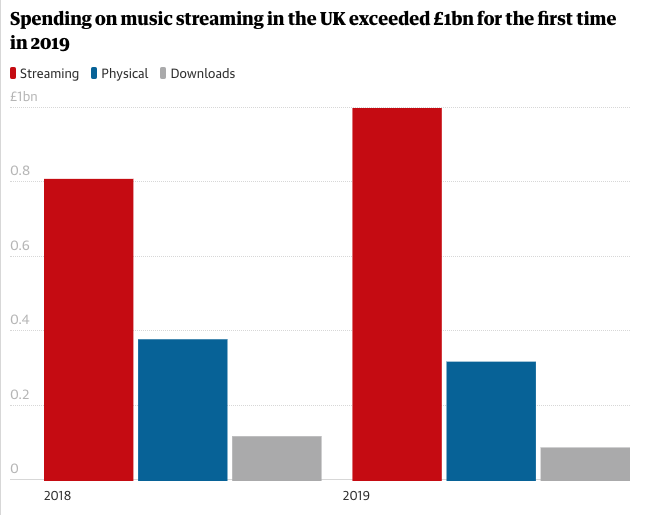 The booming video market, fuelled by the popularity of Netflix, Amazon’s Prime Video and Sky’s Now TV, proved to be the fastest-growing entertainment sector, up 9.5% to £2.6bn. The streaming revolution is driving growth, with revenues from digital video surging 21.5% last year to £2.1bn. Just a decade ago digital video revenues stood at just £154m.

The digital boost came as high street sales of DVDs and Blu-ray Discs continued their precipitous decline, down 22.6% to £477m last year. The UK’s physical video rental market is edging closer to disappearing completely, accounting for just £23m of sales. The biggest-selling video of last year was the Queen biopic Bohemian Rhapsody, which sold 1.7m copies, two-thirds of which were in a physical format. The top five sellers include Avengers: Endgame, Toy Story 4, Mary Poppins Returns and A Star Is Born.

“Physical entertainment is still a £1.4bn retail business,” said Bayley. “Physical is down, but it is definitely not out. Physical formats are [still] the key to scoring a blockbuster hit. Every one of the year’s top 10 biggest video hits sold more on DVD and Blu-ray than they did digitally.”

Physical entertainment is still a £1.4bn retail business. Every one of the year’s top 10 biggest video hits sold more on DVD and Blu-ray than they did digitally.

It is the same story in music as streaming replaces traditional formats, the ongoing revival in vinyl and cassettes notwithstanding, as sales of the once-mighty CD continue to fall steeply. Spending by UK music fans on streaming services rose by 23.5% last year to hit £1bn for the first time. The rise of the streaming era has been as remarkable as the demise of the CD, with streaming revenues totalling just £31.5m in 2010. Total music revenues rose for the fifth year in a row, up 7.1% to £1.4bn.

The report highlights the extent to which the rise of legal streaming services continues to be the salvation of record companies and artists. Physical sales of CDs fell 17% to £318m – two-thirds smaller than the £873m market of 2010. The biggest-selling album of the year was Lewis Capaldi’s debut Divinely Uninspired to a Hellish Extent, which sold 641,000 copies. The top 10 bestselling albums include Billie Eilish’s When We All Fall Asleep Where Do We Go and Ariana Grande’s Thank U, Next. 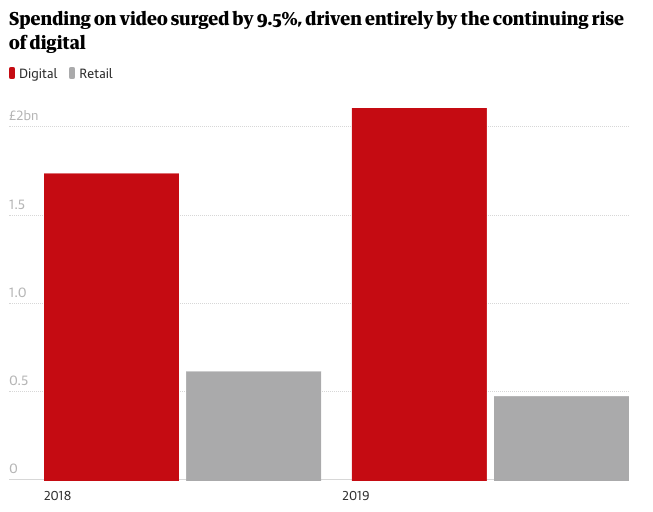 A bright spot in the physical music world is the continuing revival in popularity of vinyl, which bucked the broader trend, with sales increasing 6.4% to £97m. It is the 12th consecutive year of vinyl sales growth, as the popularity of the record returns to levels not seen since the 1980s. Liam Gallagher’s Why Me? Why Not was the most successful vinyl album of the year. Vinyl sales have now overtaken the market for digital music downloads, which fell 27% to £89.7m, another casualty of music fans’ preference for streaming.

“More and more people are signing up to streaming services,” said Bayley. “UK music fans spent £190m more on subscription streaming services in 2019 than they did the year before. That’s more than twice the value of the entire vinyl market.”

UK music fans spent £190m more on subscription streaming services in 2019 than they did the year before.

Last year, British fans bought or streamed the equivalent of more than 150m albums as music consumption in the UK hit its highest level since 2006.

The only underperforming sector last year was the usually robust gaming market, almost the same size as music and video combined, which shrunk by 3.4% to £3.7bn last year. The ERA blamed the revenue decline, the first since 2012, on gaming fans holding off making purchases as they wait for new PlayStation and Xbox consoles to come out this year. The biggest-selling games title of last year was Fifa 20, which sold just over 1.5m copies, generating £73m in revenue.

“The key message from the games business in 2019 is we need those two new consoles from PlayStation and Xbox, and soon,” said Bayley.