The boss of Lego has said the toymaker is working with UK retailers to “make sure they have enough stock” this Christmas in case of a no-deal Brexit.

Niels Christiansen said the Danish firm was not expecting problems but that he was “monitoring the situation” nonetheless.

Prime Minister Boris Johnson has said he wants to take the UK out of the EU on 31 October, with or without a deal.

But some have warned this could cause chaos for British retailers.

Potential risks include delays at ports and higher prices for imported goods caused by further falls in the pound – although others say the claims have been exaggerated.

We have been working with customers to make sure the flow of product won’t be disrupted.

Lego imports its bricks into the UK from the Czech Republic, Denmark and Hungary, suggesting it could be at risk from new trade barriers.

It also raised wholesale prices by 5% in the UK in 2016 in response to the pound’s devaluation after the Brexit referendum.

The firm declined to comment on whether its Christmas pricing might be affected in the case of a no-deal scenario, but Mr Christiansen said the toymaker was unlikely to be “majorly affected” by no deal.

“We have been working with customers to make sure the flow of product won’t be disrupted,” he said, but declined to specify what those measures might be.

Mr Christiansen made the comments after Lego announced a 4% rise in revenue for the first half of the year to 14.8bn Danish Krone (£1.8bn), although profits fell 16% as it reinvested in its business. 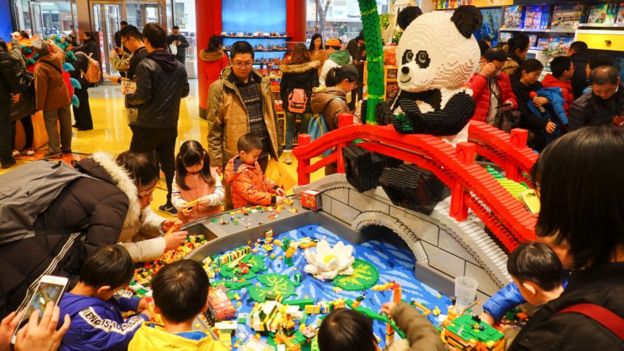 Lego plans to open a further 80 stores in China this year (Source: VCG)

And at a time when rival toymakers are struggling, the family-owned firm said it planned to open 160 new stores this year globally – 16 of them in the UK.

Eighty of the shops will be in China, with the Danish firm on track to have 140 stores in the country by the end of 2019.

Asked if he was concerned about a recent slowdown in China’s economy, driven by Beijing’s trade war with Washington, Mr Christiansen said he still saw the country as a growth market.

“We have been helped by the fact that we produce our products around the world close to where the demand is, so for China we produce in Asia,” he said.

Despite this, the firm has come up against a wave of counterfeit Lego products in China which Mr Christiansen admitted had been challenging.

Copycat brands have even made their way to the UK, although Mr Christiansen said the Chinese authorities were getting tougher on the practice.

“There have been some court rulings in our favour in China, so we do see an element of progress.”

Lego has committed to use only sustainable materials in its core products and packaging by 2030 amid rising concerns about plastic waste.

And last year it launched its first ever Lego products made from polyethylene, a type of plastic derived from sugar cane, to replace materials sourced from fossil fuels.

The products only represent 1-2% of the total amount of plastic produced by Lego – leading some to question how committed the firm was to its 2030 goal.

Our bricks are sometimes kept for 40-60 years.

But Mr Christiansen stressed that Lego bricks were durable, not “single use” plastics and rarely thrown away. “Our bricks are sometimes kept for 40-60 years,” he said.

Despite this, he said the firm was investing heavily in finding durable yet sustainable alternatives.

“The safety and durability of blocks is not trivial, and we are looking for the right materials.”