The question was plastered throughout London’s subway system, and so was the model doing the asking. Clad in a tiny yellow bikini, her rib cage clearly visible, the woman squinted her eyes, pursed her lips and mused, “Are you beach body ready?”

The ad peddling a weight-loss product got a huge response, though likely not the one its creators had hoped. More than 70,000 people signed an online petition insisting the ads be taken down. The campaign also helped kick-start a review by the United Kingdom’s Advertising Standards Authority. Ads portraying gender stereotypes, like a woman cleaning while a man relaxes with his feet up, are now prohibited in Britain. (WSF)

The new guidelines prohibit ads that play up roles deemed more feminine or male, as well as derogatory messages around body image. That would include a TV spot, for example, that shows children making a mess while a man props up his feet and a woman cleans up; or ads showing a man who can’t change a diaper or a woman who can’t park a car. Advertising that links physique and body image to a successful romantic or social life is also, as are ads that belittle men for doing stereotypical “female” tasks.

Gender stereotypes “can contribute to inequality in society, with costs for all of us,” Guy Parker, chief executive of the Advertising Standards Authority, said in a statement.

It’s in the interests of women and men, our economy and society that advertisers steer clear of these outdated portrayals.

“Put simply, we found that some portrayals in ads can, over time, play a part in limiting people’s potential,” he said. “It’s in the interests of women and men, our economy and society that advertisers steer clear of these outdated portrayals.”

The guidelines were approved in December, but the advertising industry was given six months to comply. Regulators will review any ads that could break the rules individually. And the guidelines don’t cover everything: They wouldn’t necessarily block ads that are targeted at one gender or simply show a woman shopping, for example.

The rules mimic ones adopted in Belgium, France, Norway, South Africa, India and elsewhere. A 1978 law, for example, bans sexism in Norwegian ads. Spain won’t allow ads depicting gender violence, according to the New York Times. In the United States, advertising campaigns geared toward children have their own restrictions to ensure that content is appropriate and safe. 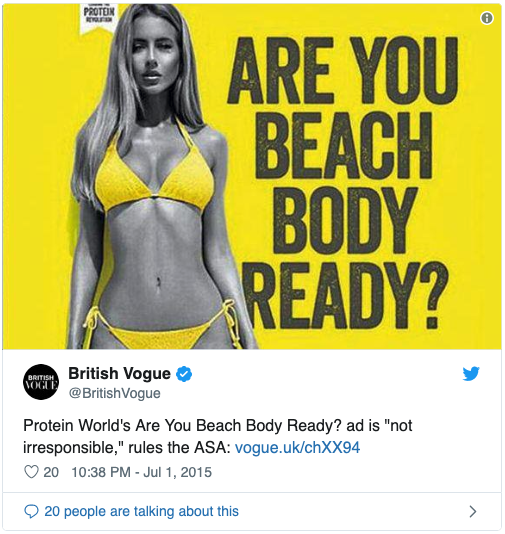 Yet Britain’s guidelines raise questions about enforceability and practicality, said Beth Egan, an associate professor of advertising at Syracuse University. Until the ban is tested, Egan said, it’s hard to predict where the line will be drawn “between what’s a gender stereotype and what’s a representation of real life in the real world.”

Plus, Egan said, Americans shouldn’t assume that similar guidelines are around the corner here. The United States and Britain have significantly different standards and cultural expectations around privacy and regulation, even as they apply to ads promoting gender stereotypes.

“Our history is more about consumer backlash and self-regulation than allowing a voice from on high to come down and just say, ‘you can’t,’” Egan said.