“Terrible. [They] stick in one’s throat.” That was one smoker’s dismissal of Camel cigarettes, just before taking a blind taste test in 1920s America.

His usual brand, Lucky Strike, “go down easy and smooth” he said. And that’s how he knew he must be smoking a Lucky.

As Allan M. Brandt recounts in The Cigarette Century, the man was – of course – unwittingly smoking a Camel.

Nowadays, the awesome power of branding is hardly news. Back then, it was only just beginning to become apparent.

“The Camels are coming!” ran the tease, followed by another advert promising: “Tomorrow there’ll be more Camels in this town than in all Asia and Africa combined!” before the final proclamation that “Camel cigarettes are here!”

In fact, cigarette historian Robert Proctor argues: “It is probably fair to say that the industry invented much of modern marketing”.

So, why did cigarettes lead the way?

A few reasons. Cigarettes might have struggled without the accidental discovery of flue-curing. It made tobacco less alkaline, meaning you could suck smoke into your lungs, which is more addictive than holding it in your mouth. The invention of the safety match helped, too.

But the starring role goes to an inventor from Virginia called James Bonsack and his clever machine.

In 1881, when Bonsack patented his new apparatus, tobacco had been around for centuries but cigarettes remained a niche product. The market was dominated by pipes, cigars and chewing tobacco.

Bonsack’s father owned a wool factory. The son looked at the factory’s carding machine – which helped turn fibres into yarn – and wondered if he could adapt it to roll cigarettes.

The contraption he designed weighed a ton, but churned out 200 cigarettes a minute – almost as many as a human, rolling by hand, could make in an hour.

The significance was clear to tobacco entrepreneur James Buchanan Duke, who promptly cut a deal with Bonsack, and set about cornering the cigarette market.

But Duke’s opportunity was also a challenge. He could make lots of cigarettes – but could he sell them?

At the time, cigarettes were seen as lower-status than cigars, which – crucially – were proving altogether harder to mechanize.

Duke wasn’t daunted, and saw what he had to do: advertise.

He came up with gimmicks like coupons and collectable cards, and by 1889, was spending some 20 per cent of his revenues on promotion, which was simply unheard-of.

And it worked. By 1923, cigarettes had become the most popular way for Americans to consume tobacco.

Many early advertising campaigns now raise eyebrows. Lucky Strikes, for instance, were pitched as an aid to slimming. “Reach for a Lucky instead of a sweet,” ran the tagline.

Sweet makers were outraged. “Do not let anyone tell you that a cigarette can take the place of a piece of candy,” one advertised back. “The cigarette will inflame your tonsils, poison with nicotine every organ of your body, and dry up your blood – nails in your coffin.”

But who would you trust for health advice – candy companies, or medical professionals? After all, according to one Lucky Strike campaign: “20,679 Physicians say ‘Luckies are less irritating'”. If that didn’t persuade you, how about: “More doctors smoke Camels than any other cigarette”?

The blind taste-tests suggested claims about throat irritation were spurious, and a more systematic investigation by Reader’s Digest magazine in the 1940s reached the same conclusion. In terms of health, it made “no earthly difference” which brand you bought.

In the 1950s, American regulators decided they shouldn’t allow cigarette adverts to reference doctors or body parts. It looked like a crisis for advertisers, but turned out to be liberating, as dramatised in the television series Mad Men.

“This is the greatest advertising opportunity since the invention of cereal,” says ad man Don Draper. “We have six identical companies making six identical products. We can say anything we want.”

Mr Draper may be fictional, but the insight was on point. When products are essentially indistinguishable, companies can compete on price – but that erodes their profit margins.

Much better to compete on branding. Make people think the products are different, so you can appeal more effectively to different buyers.

In the 1960s, Americans bought more cigarettes than ever. Perhaps you smoked Marlboro to associate yourself with the rugged masculinity of the Marlboro Man. Maybe you’d see the slogan “You’ve Come A Long Way, Baby,” and signal your approval of feminism by smoking Virginia Slims. 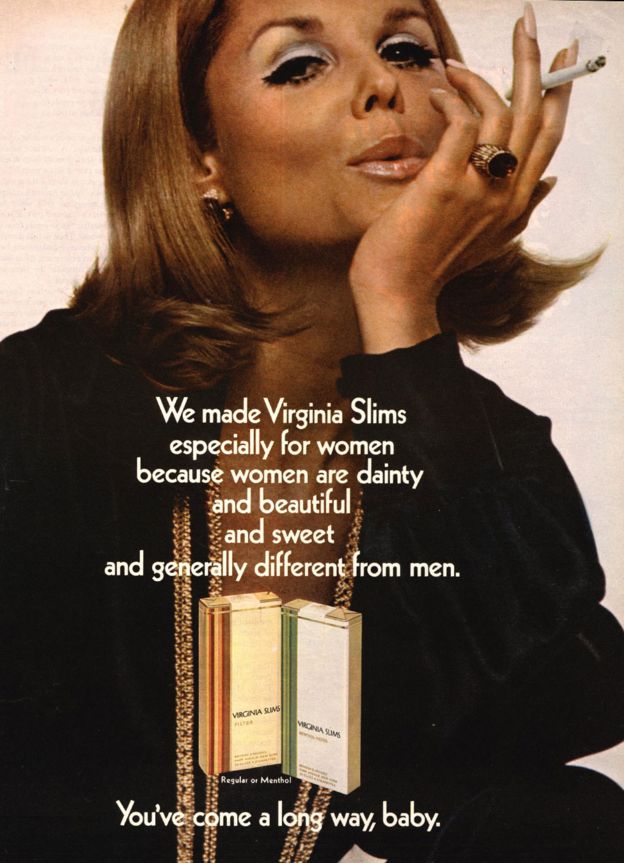 Economists talk about the “consumer surplus” produced by a product: the enjoyment the product produces, minus the money you have to spend to get it.

Does it matter if that enjoyment comes from your appreciation of a product’s qualities, or your fond beliefs about the brand? If you confidently misidentify Camels as Lucky Strikes in a blind taste-test, should we take less seriously the enjoyment you say you get from Lucky Strikes?

No doubt we can be relaxed about this question when it comes to cornflakes, or soup or toothpaste.

But with a product as deadly as cigarettes, we might worry when the consumer experience is bound up with the branding.

Many countries have duly banned television adverts and sports sponsorship for cigarettes. Some insist on plain packaging, with brand names rendered in a uniform typeface.

An employee in a shop in Australia selects a packet of cigarettes. Source: GETTY IMAGES

In many places, smoking is now in decline. But in some poorer countries with looser regulations, it’s a different story.

Around the world, about six trillion cigarettes are still made every year. Put them end to end, and every four months you’d have one long enough to reach the Sun.

For example, in China, in the half-century after Chairman Mao took power, per-capita cigarette sales went up roughly ten-fold.

The China National Tobacco Corporation is the country’s most profitable company, and it sells 98% of cigarettes. State-owned, it contributes up to a tenth of government revenues.

Perhaps it’s no surprise, then, that China has been late to restrict cigarette advertising.

As recently as 2005, adverts assured that “Smoking removes your troubles and worries”. One brand warned that “Quitting smoking would bring you misery, shortening your life”. That brand’s name? Longlife.

Soon afterwards, the China National Tobacco Corporation embarked on a new policy: “premiumization”. China was getting richer, so why not persuade consumers to pay more for their smokes?

It launched new “superior” brands, which adverts touted as less harmful, higher quality and more prestigious for gift-giving. As before, the marketing worked. Previously, discount brands had outsold premium brands ten-to-one. After nine years, they were almost equal.

According to one study, just 10% of smokers in China are aware that brands labelled “light” and “low tar” are no less harmful to your health than other cigarettes.

It seems the power of brands to create credulity is still as strong as ever.

Marketing Growth Will Accelerate In The Post-Pandemic Era – Forrester